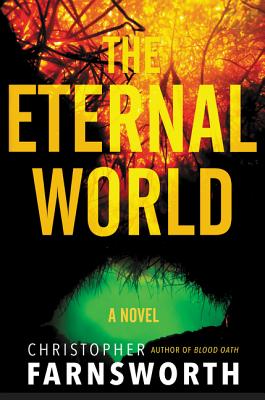 If you could live forever, what would you die for?

Five hundred years ago, a group of Spanish conquistadors searching for gold, led by a young and brilliant commander named Simon De Oliveras, land in the New World. What they find in the sunny and humid swamps of this uncharted land is a treasure far more valuable: the Fountain of Youth. The Spaniards slaughter the Uzita, the Native American tribe who guard the precious waters that will keep the conquistadors young for centuries. But one escapes: Shako, the chief’s fierce and beautiful daughter, who swears to avenge her people—a blood oath that spans more than five centuries. . .

When the source of the fountain is destroyed in our own time, the loss threatens Simon and his men, and the powerful, shadowy empire of wealth and influence they have built. For help, they turn to David Robinton, a scientific prodigy who believes he is on the verge of the greatest medical breakthrough of all time. But as the centuries-old war between Shako and Simon reaches its final stages, David makes a horrifying discovery about his employers and the mysterious and exotic woman he loves. Now, the scientist must decide: is he a pawn in a game of immortals. . . or will he be its only winner?


Praise For The Eternal World: A Novel…

“I’ve been a fan of Christopher Farnsworth ever since his first book, and he just keeps getting better. The Eternal World has exactly what I look for in great adventure fiction: a compelling plot, memorable characters, top-notch action scenes, and heart-stopping twists.”
— Boyd Morrison, author of The Ark and, with Clive Cussler, Piranha

Christopher Farnsworth is a journalist and screenwriter and the author of six novels, including the President's Vampire trilogy. He lives in Los Angeles with his wife and daughters.