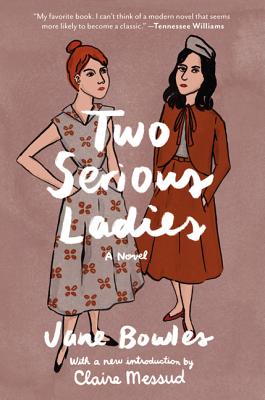 Two Serious Ladies is the only novel by avant-garde literary star and wife of legendary writer Paul Bowles—a modernist cult-classic, mysterious, profound, anarchic, and funny, that follows two upper-class women as they descend into debauchery—updated with an introduction by Claire Messud, bestselling author of The Emperor's Children and The Woman Upstairs.

Two serious ladies who want to live outside of themselves, Christina Goering and Frieda Copperfield embark on separate quests of salvation. Mrs. Copperfield visits Panama with her husband, where she finds solace among the women who live and work in its brothels. Miss Goering becomes involved with various men. At the end the two women meet again, each transformed by her experience.

Jane Bowles has long had an underground reputation as one of the truly original writers of the twentieth century. Born in New York City in 1917, she lived in Tangier, Morocco, with her husband, Paul Bowles, from 1952 until her death in 1973. Though she wrote only one novel, one short play, and fewer than a dozen short stories over a roughly twenty-year span from the early 1940s to the mid-1960s, Jane Bowles has long been regarded by critics as one of the premier stylists of her generation.