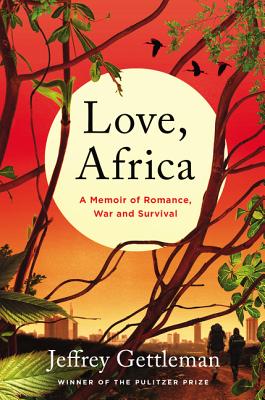 A Memoir of Romance, War, and Survival

From Jeffrey Gettleman, a Pulitzer Prize-winning New York Times journalist, comes a passionate, revealing story about finding love and finding a calling, set against one of the most turbulent regions in the world.

A seasoned war correspondent, Jeffrey Gettleman has covered every major conflict over the past twenty years, from Afghanistan to Iraq to the Congo. For the past decade, he has served as the East Africa bureau chief for the New York Times, fulfilling a teenage dream.

At nineteen, Gettleman fell in love, twice. On a do-it-yourself community service trip in college, he went to East Africa—a terrifying, exciting, dreamlike part of the world in the throes of change that imprinted itself on his imagination and on his heart.

But around that same time he also fell in love with a fellow Cornell student—the brightest, classiest, most principled woman he’d ever met. To say they were opposites was an understatement. She became a criminal lawyer in America; he hungered to return to Africa. For the next decade he would be torn between these two abiding passions.

A sensually rendered coming-of-age story in the tradition of Barbarian Days, Love, Africa is a tale of passion, violence, far-flung adventure, tortuous long-distance relationships, screwing up, forgiveness, parenthood, and happiness that explores the power of finding yourself in the most unexpected of places.

Jeffrey Gettleman won a Pulitzer Prize for his reporting from East Africa. He was the longest-serving East Africa bureau chief in the history of the New York Times, based in Kenya for more than a decade. His stories have appeared in National Geographic, Foreign Policy, GQ, and the New York Review of Books. A native of Evanston, Illinois, Gettleman studied philosophy at Cornell University and anthropology at the University of Oxford, where he was a Marshall Scholar.


Praise For Love, Africa: A Memoir of Romance, War, and Survival…

“A passionate debut memoir bears witness to political turmoil… A stark, eye-opening, and sometimes horrifying portrait by a reporter enthralled by the ‘power and magic’ of Africa.”
— Kirkus

“[Gettleman’s] beautifully written memoir is about many kinds of love…The path to love is not always straight, but when Gettleman discovers his true passions, he grabs hold and doesn’t let go. Love, Africa offers a key to understanding humankind’s past and future and a key to understanding our hearts.”
— Sheryl Sandberg

“Rarely do you read such beautifully rendered honesty: witness the eyes and heart of Jeffrey transform into a remarkable person and writer for our time.”
— Ishmael Beah

“Gettleman’s memoir of his life, his love, and the excitement and perils of journalism is a page-turner. The portrait of Africa that emerges is disturbing, tender, and harsh. …. A tremendous read. I couldn’t put it down.”
— Abraham Verghese

“Jeffrey Gettleman’s memoir is truly, in all its complicated tragic beauty, a love story made up itself of inextricably intertwined love stories. I was mesmerized.”
— Alexandra Fuller

“To feel the fear, sinfulness, and rapture of being a foreign correspondent, read this book! Using self-lacerating truth and high velocity prose, Jeffrey Gettleman has written a compulsively readable new story about what it means to be ‘our man in Africa.’”
— Blaine Harden

“Jeffrey Gettleman has true grit. That’s why he was in my book, and why you have to read his.’’
— Angela Duckworth

“…[Gettleman] takes readers... into the most terrifying and beguiling continent in the world.…Gettleman is a rare combination of dogged reporter and very fine writer…I kept catching myself wondering whether it was too late to go back and lead his life rather than my own .”
— Sebastian Junger

“[An] exciting, harrowing memoir that aptly displays why [Gettleman’s] a Pulitzer Prize winner and a New York Times bureau chief…. there’s a thrilling immediacy and attention to detail in Gettleman’s writing that puts the reader right beside him…Gettleman’s memoir is an absolute must-read.”
— Booklist (starred review)