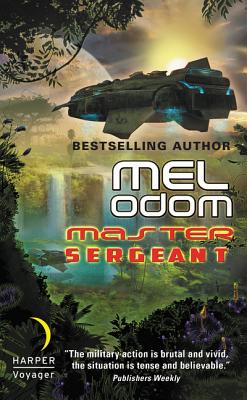 The Makaum War: Book One

They call it The Green Hell. A maze of tangled jungle, the planet Makaum is one of the most dangerous places in the universe. And for Terran Military Master Sergeant Frank Sage, it is now home.

The war between the Terrans and the Phrenorians rages, and both sides have their sights set on Makaum. If the planet's rich resources fall into enemy hands it could mean devastation for the Terran Army. To ensure that doesn't happen, Sage is sent to assess the Makaum troops and bring them in line with Terran Military standards. But soon after arriving at his post, he realizes the Phrenorians are not the only threat. Heading up a small but fearless unit, Sage must stop a brewing civil war with the power to unleash a galactic cataclysm unlike anything ever seen.


Praise For Master Sergeant: The Makaum War: Book One…

“The military action is brutal and vivid, the situation is tense and believable … and the allegorical story moves at a fast clip.”
— Publishers Weekly

Mel Odom is the bestselling author of the Makaum series and many film and computer game tie-ins, including Forgotten Realms, Mack Bolan, Buffy the Vampire Slayer, and Angel. He won a prestigious Alex Award for his YA fantasy novel The Rover. He currently lives in Oklahoma.