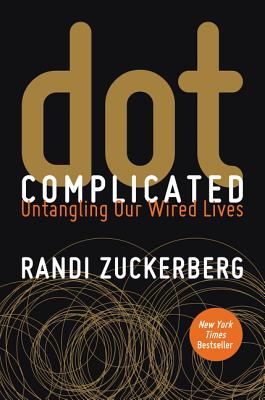 With Dot Complicated: Untangling Our Wired Lives, new media pioneer Randi Zuckerberg offers an entertaining and essential guide to understanding how technology and social media influence and inform our lives online and off.

Zuckerberg has been on the frontline of the social media movement since Facebook’s early days and her following six years as a marketing executive for the company. Her part memoir, part how-to manual addresses issues of privacy, online presence, networking, etiquette, and the future of social change.

“For all that current technology has done to improve and simplify our lives, it has undeniably complicated the way we communicate and relate to those around us. Randi’s experience and perspective provide the perfect guide to socially navigating the digital age.”
— Kathleen Kennedy, President, Lucasfilm

“Randi has had a front row seat to the shift of a social culture. Dot Complicated offers insights to the way the world is changing and the tech sensibility you will need to navigate this new dynamic.”
— Ashton Kutcher

“With impeccable timing, Zuckerberg discusses the hot button issues of the moment and shows us how to use technology to bring positive change to the world. Dot Complicated is a great roadmap in navigating the evolving universe of social media.”
— Ron Conway, Silicon Valley angel investor and philanthropist, secured early stage funds for Google, Ask Jeeves, Pinterest, Square, and Twitter

“Randi Zuckerberg provides a valuable and much-needed guide to navigating the stormy seas of social and digital media. You couldn’t ask for a better guide than Randi who has been at the front line of social media from the start.”
— Charlene Li, Founder of Altimeter Group, and author of New York Times bestseller Open Leadership

“If you want an entertaining peek into the formative days at Facebook, start here. Randi candidly shares her personal story as an early employee, navigating the complicated space between her personal life and her public persona.”
— Tina Seelig, Professor and executive director of the Stanford Technology Ventures Program, and bestselling author of What I Wish I Knew When I was 20 and inGenius

“Randi Zuckerburg eloquently captures the art of doing it all (including disconnecting) in the digital age. Before you send one more text, you MUST read this book. It’s high time to take charge of our technology devices before they take charge of us.”
— Leslie Blodgett, Executive Chairman of Bare Escentuals and creator of bareMinerals