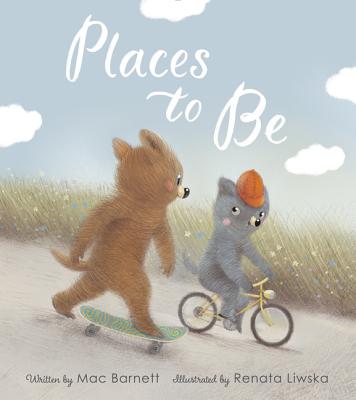 From the award-winning, bestselling Mac Barnett and Renata Liwska comes a classic and luminous book perfect for fans of The Quiet Book by Deborah Underwood and Waiting by Kevin Henkes.

With an elegant simplicity, this picture book celebrates all our wide-ranging emotions—and the adventures that await us each day.

We have so many places to be!

Places to be loud


Praise For Places to Be…

“This winning read-aloud can be used to encourage friendship in young children.”
— School Library Journal

“A sweet and gentle contrast to Seuss’ Oh, the Places You’ll Go!”
— Booklist

Praise for EXTRA YARN: “There’s nothing to say but perfect.”
— Lane Smith, New York Times bestselling author of IT'S A BOOK

Praise for SAM AND DAVE DIG A HOLE: “A clever second collaboration between Barnett and Klassen...The prose is deadpan; the joke’s all in Klassen’s winsomely smudgy illustrations.”
— New York Times Book Review

Praise for SAM AND DAVE DIG A HOLE: “Barnett’s comic voice is at its driest as he recounts that quintessential American childhood activity—the digging of the giant hole.”
— Publishers Weekly (starred review)

Praise for LEO: A GHOST STORY: “A tender, touching story of friendship and the power of imagination.”
— Booklist (starred review)

Praise for THE SKUNK: “Gives off a deliciously Hitchockian air of high style and deep-seated dread. . . a story that speaks to the urbane existentialist/absurdist lurking in the heart of every reader.”
— Publishers Weekly (starred review)

Praise for THE SKUNK: “Clever visual motifs, sly storytelling, and tight pacing make this a picture book that will be enjoyed by both children and their grown-ups.”
— School Library Journal (starred review)

Praise for THE SKUNK: “A daffy yet stylish readaloud with surprising performance possibilities.”
— Bulletin of the Center for Children’s Books (starred review)

Renata Liwska grew up in Warsaw, Poland, and now lives in Calgary, Alberta. She is the illustrator of The Quiet Book and The Loud Book!, both written by Deborah Underwood and both New York Times bestsellers. For The Quiet Book, Renata Liwska was awarded the 2010 Society of Illustrators Gold Medal and was named a 2010 Governor General’s Literary Award finalist. Visit her online at www.renataliwska.com.