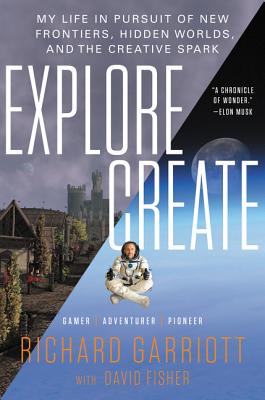 The inspiring memoir from legendary entrepreneur, gaming pioneer, and space adventurer Richard Garriott -- "game god" (PC Gamer) and inspiration for Ready Player One -- Explore/Create invites us on a grand adventure, introducing us to the wondrous and magical

Richard Garriott's story begins with an Apple II and a dream. At eighteen, he spent his entire life savings -- two hundred dollars -- to produce Akalabeth, his first video game. That covered the floppy discs and the Ziploc bags the game was sold in; his mother drew the cover art. The first week they sold maybe a dozen copies, but soon after, the California Pacific Computer Company came calling, asking to publish the game. These were the Wild West days of the game industry -- hard partying, outrageous personalities, and fledgling studios trying to make a quick buck.

Never could Richard have foreseen that this would become a multibillion-dollar industry with the top games eclipsing even Hollywood's highest grossing films. He would go on to launch Ultima, a seminal series of role-playing games. Ultima Online was the first massively multiplayer online role-playing game (MMORPG), and one of Time's 100 greatest video games ever. Throughout, Richard has aspired to build the most lifelike gaming worlds possible, allowing players to interact with every object on the screen, experience consequences for moral transgressions, and fully personalize their gaming journey.

Away from the screen, Richard has also pushed the limits of human experience. A lifelong adventurer, he has plumbed the depths of the Atlantic Ocean to see the remains of the Titanic and hunted for meteorites in Antarctica, and in 2008 he became one of the first private citizens to travel into space. In 2014, Maxim named him one of the "Six Most Interesting Men You Can Actually Meet." Here, in his own words, is his extraordinary life story.

Filled with interactive tie-ins and challenges, Explore/Create is unlike any other memoir, an unforgettable ode to exploration and discovery that will spark the creative impulse in all of us.


Praise For Explore/Create: My Life in Pursuit of New Frontiers, Hidden Worlds, and the Creative Spark…

“Richard Garriott has inspired me to explore and create since I was a teenager. I never would’ve written Ready Player One if I hadn’t grown up playing the games he created as Lord British. This is the book I’ve been waiting to read for a long, long time.”
— Ernest Cline, New York Times bestselling author of Ready Player One

“Fascinating.... Demystifies an industry and a man so instrumental in it.... A rich compendium of stories from an extraordinary life.”
— Eurogamer.net

“Lively and entertaining.... [Garriott] embeds puzzles and games in the book for those who want to take it beyond the simple experience of reading.... Those looking for glimpses into an adventurous life should be pleased.”
— Kirkus Reviews

“Explore/Create is a chronicle of wonder, and the many wondrous things the future may hold. Richard and I have long shared a passion for space. Perhaps one day our kids will create and play games on a new world!”
— Elon Musk, CEO, SpaceX and Tesla Motors

“Richard and his partners at Zero-G took me on my first flight into weightlessness. ... I applaud his spirit and have enjoyed the fruits of his labor.”
— Stephen Hawking

“I was so taken by Richard Garriott’s game Ultima that I was nearly speechless when I met him at a pizza joint in Chicago. Now finally, Richard has shared his compelling story with the rest of us in Explore/Create.”
— Steve Wozniak, co-founder of Apple

“Richard and I are both among the first private astronauts, and we have used our unbound power of imagination to take us to new heights. This book will take you on an insider’s journey into Richards fascinating mind from creating virtual worlds and characters to exploring the cosmos. Buckle up!”
— Anousheh Ansari, 1st Muslim woman to go into space

“Garriott’s enthusiasm for his passions is evident and... even inspirational.”
— Booklist Online

“An entertaining book that describes Garriott’s twin passions to explore (not just space but also the deep sea and Antarctica, among other places) and create.”
— The Space Review

David Fisher is the author or coauthor of dozens of books, including 22 New York Times bestsellers. He has worked with George Burns, Johnnie Cochran, and Terry Bradshaw, among others. He lives in New York City.