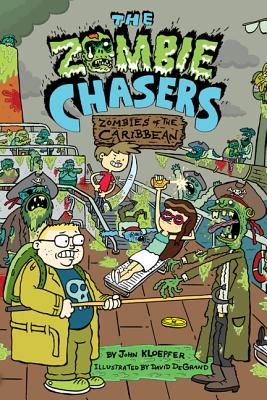 Zombies of the Caribbean

The Zombie Chasers take to the high seas in the sixth installment of John Kloepfer's hysterical Zombie Chasers tween series, illustrated by David DeGrand. With all the middle school shenanigans, fast-paced adventure, and hilarious black-and-white drawings that have made this series so beloved by reluctant readers everywhere, The Zombie Chasers #6: Zombies of the Caribbean is a gore-larious romp not to be missed!

Zack Clarke and his team—Zoe, Rice, Ozzie, Madison, and Olivia—have fled the infested coasts of Florida, chased by a ravenous mob of super zombies. With no antidote in sight, there's only one person who can help them now: an eccentric explorer—and renowned zombie expert—who's lying low in a zombie-proof bunker somewhere in the Caribbean. As the pals fend off decomposing pirates, crusty crew mates, and putrid sea creatures, they race to uncover the cure for zombies everywhere. But will they be able to defeat the zombies of the Caribbean before the cure and their plan go overboard?


Praise For The Zombie Chasers #6: Zombies of the Caribbean…

Praise for the The Zombie Chasers: “Kloepfer’s first is a Zombieland for the middle-school set: funny, off-color and extremely gross. A great pick for the child who thought Diary of a Wimpy Kid just needed more motile corpses.”
— Kirkus Reviews

“If there’s an award for the grossest descriptions of zombies, Kloepfer would win it. Preteen boys will love it.”
— St. Paul’s Pioneer Press

Praise for The Zombie Chasers #2: Undead Ahead: “Written with tongue firmly in cheek-and other body parts all over the landscape-this book will appeal to reluctant readers, particularly middle school boys.”
— School Library Journal

Praise for The Zombie Chasers #3: Sludgment Day: “Fans of Garbage Pail Kid-style gross-outs will have a ball as Zack and his buddies take down “a butt–load of zombies.”
— ALA Booklist

David DeGrand has been drawing cartoons since he was a kid. When he's not drawing goofy pictures of gross stuff, he plays video games, watches old cartoons and weird movies, and collects toys and books. His biggest goal is to create something his son will find cool someday. He lives with his wife and family in Texas.