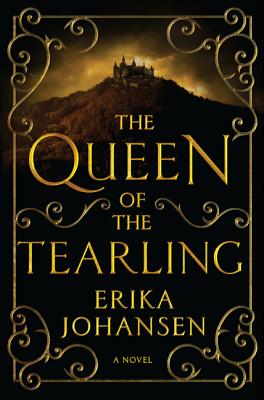 “Call it The Hunger Games of Thrones. Erika Johansen’s debut novel is a genre mashup: medieval fantasy meets dystopian future. . . . The setting, combined with Johansen’s deft hand with character and plotting, really does work. . . . An addictive and enjoyable adventure. . . . The Tear is just as easy to get sucked into as Westeros or Hogwarts or Panem.” —USA Today

This book is a beautifully designed package with illustrated endpapers, a map of the Tearling, and a ribbon marker.

“Johansen’s dark, dizzying time machine is what made this book impossible to put down. You’re in the twenty-fourth century, but also the Middle Ages? The implications made us see our world today--particularly technology and education--in a new light.”
— Glamour

“Quite possibly the highlight of one’s vacation. . . . This spectacular debut is the first novel in a trilogy that is sure to entertain readers everywhere.”
— Wall Street Journal, Books-A-Million List of Best Books to Finish Your Summer Vacation

“Call it The Hunger Games of Thrones. Erika Johansen’s debut novel is a genre mashup: medieval fantasy meets dystopian future. . . . The setting, combined with Johansen’s deft hand with character and plotting, really does work. . . . An addictive and enjoyable adventure. . . . The Tear is just as easy to get sucked into as Westeros or Hogwarts or Panem.”
— USA Today

“The Queen of the Tearling tells the mesmerizing and enveloping story of an exiled princess who has to reclaim her throne while fighting back against the neighboring kingdom’s menacing Red Queen.”
— Buzzfeed

“Queen Kelsea is the most compelling badass heroine since Katniss Everdeen in this fantasy epic set in a neo-feudal future.”
— San Francisco Chronicle

“Forget The Hunger Games (sorry!): The Queen of Tearling is the best YA novel I’ve read in ages.”
— Jezebel

“This book absolutely kept me turning the pages at maximum speed, while also soaking up all of the fun character bits. . . . Kelsea has a lot of emotional and psychological complexity along with her extreme competence. . . . A superfast, ridiculously fun read.”
— io9.com

“[The Queen of the Tearling] has engaging characters and moves effortlessly through moment after captivating moment; I could not put it down.”
— A.V. Club

“An impressive start to a series, Johansen expertly incorporates magic necklaces, political intrigue, questions of honor, well-drawn characters, and a bit of mystery into a compelling and empowering story.”
— Booklist (starred review)

“Johansen makes an impressive debut with this ambitious fantasy adventure, which takes place several centuries from now following the collapse of civilization and mass migration to a newly discovered continent. . . . With a forceful, memorable heroine immediately thrust into a series of intense situations . . . this trilogy launch is still an engaging page-turner.”
— Publishers Weekly

“A bright new entry in the fantasy genre. A heady mixture of adventure, romance, magic and mystery, this debut novel from Erika Johansen is a captivating work.”
— Bookreporter.com

“The Queen of the Tearling is a gripping read with an enchanting heroine. Erika Johansen has created a wonderful world and I can’t wait to read more.”
— Bernard Cornwell, New York Times bestselling author of The Pagan Lord

“Erika Johansen bursts onto the fantasy scene with a page-turner full of adventure, sorcery, swords, and politics -- not to mention a clever heroine with guts and conviction to spare. The Queen of the Tearling kept me up way past my bedtime, and left me wanting more!”
— Helene Wecker, New York Times bestselling author of The Golem and the Jinni

“This book worked on me with all the subtle power of an addiction: by the time I realized I was hooked, it was far too late to stop.”
— Lauren Oliver, New York Times bestselling author of the Delirium trilogy and Panic

“The Queen of the Tearling is destined to be a fantasy classic. Johansen’s writing is assured, confident and thrilling. I can’t wait for the next book.”
— Amy McCulloch, author of The Oathbreaker's Shadow