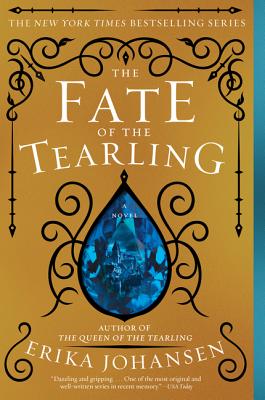 The Fate of the Tearling

“Johansen has created an incredibly intense, intriguing, and completely captivating conclusion for her Tearling trilogy, that is sure to please all readers awaiting Queen Kelsea's fate. Rash, reckless, and filled with rage, Kelsea has surrendered to the Red Queen while unwittingly unleashing the Orphan, a threat so evil that both soon find themselves fighting together for their own survival. Will Kelsea unravel the mystery of her magical sapphires and save the Tear kingdom from ultimate destruction? Or, is she destined for an early demise thereby sealing the fate of the Tearling?”
— Kristin Bates (E), McLean & Eakin Booksellers, Petoskey, MI
View the List

"Katniss Everdeen, you have competition."—Entertainment Weekly

In the final volume of the the New York Times bestselling Tearling trilogy, which has captivated readers around the world, Erika Johansen brings the series to a climactic and satisfying close.

In less than a year, Kelsea Glynn has transformed from a gawky teenager into a powerful monarch. As she has come into her own as the Queen of the Tearling, the headstrong, visionary leader has also transformed her realm. In her quest to end corruption and restore justice, she has made many enemies—including the evil Red Queen, her fiercest rival, who has set her armies against the Tear.

To protect her people from a devastating invasion, Kelsea did the unthinkable—she gave herself and her magical sapphires to her enemy, and named the Mace, the trusted head of the Queen’s Guard, as Regent in her place. The Mace will not rest until he and his men rescue their sovereign, imprisoned and imperiled in Mortmesne. While they embark on this dangerous mission, Kelsea must unravel the secrets of her own heritage and of the Tearling’s past, secrets with stakes far higher than she could ever have imagined. But a powerful new enemy stands in her way. Bolstered by anger from the past and growing stronger by the day, he’ll stop at nothing to destroy anyone who challenges his claim.

Now, as the suspenseful endgame begins, the fate of Queen Kelsea—and of the Tearling itself—will finally be revealed.

“Kelsea flourishes alongside the other female characters at the center of the novel: These are powerful, determined women who work hard to accomplish their goals even as their mistakes haunt them. Johansen doesn’t punish them for these mistakes; she allows them to grow, leading to a well-earned ending.”
— Washington Post

“Johansen has consistently taken huge narrative risks with this series. . . . With richly developed characters who are never boring black and white, and villains who are as fascinating as the heroes, the finale of this outstanding series will be talked about by readers.”
— Library Journal, Pick of the Month

“Johansen’s vision—a society tearing itself apart amid the effort to redefine itself—is ambitious, and the conflict is fleshed out through myriad character arcs. . . . wraps up the story quite nicely.”
— Publishers Weekly

“Excellent.”
— Entertainment Weekly, “Must List”
”The final Queen of the Tearling installment continues to follows the fate of Queen Kelsea and the Tearling in a heart-pounding, epic conclusion of this series. It’s one that’s been eagerly anticipated, so if you haven’t read the prior two books, you’ll definitely want to get on top of that.”
— Buzzfeed

“This is a thrilling conclusion to a fantastic trilogy. . . . Johansen’s fans will be pleased.”
— Booklist (starred review)

“Fantasy fans will flock to this electrifying conclusion to the best-selling Tearling trilogy.”
— Cosmo Reads

“...Find out the result of Queen Kelsea’s bejeweled sacrifice in the finale of our favorite fantasy trilogy.”
— Entertainment Weekly

“Fantasy fans will flock to this electrifying conclusion to the best-selling Tearling trilogy.”
— Cosmopolitan

“A time-traveling adventure with the fate of a world in the balance. . . . Johansen creates her most sweeping vision of Kelsea and her world yet, packing her story with political machinations and explosive revelations, including the long-withheld identity of Kelsea’s father. The stunning ending makes a bold statement about sacrifice and rebirth. . . . Astonishing.”
— Shelf Awareness