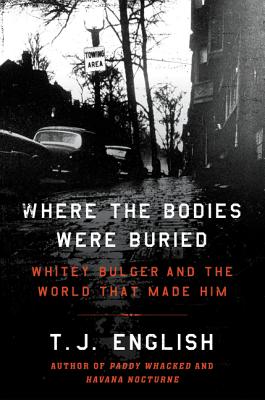 Where the Bodies Were Buried


Praise For Where the Bodies Were Buried: Whitey Bulger and the World That Made Him…

“WHERE THE BODIES WERE BURIED is a searing narrative of the criminal underworld that reads like fiction, but unflinchingly exposes the truth about Whitey Bulger, his world, and the system that allowed him to flourish for years.”
— Huffington Post

“English goes into great detail and presents solid evidence that the demoralization of the Boston FBI and the Department of Justice (DOJ) allowed these men to terrorize New England. . . . This kind of insight into corruption in the FBI and the DOJ doesn’t get published very often.”
— Library Journal

“In his fascinating new book, English indicts the federal criminal justice system in New England, accusing it of enabling an entire era of murder and mayhem. Thoroughly gripping and thoroughly depressing, WHERE THE BODIES WERE BURIED . . . is a disturbing an addicting read.”
— Christian Science Monitor

“This is a candid and unflattering look at this country’s broken criminal justice system…. As intriguing as it is revealing. . . . Illuminating, disconcerting, shocking, insightful and engaging as well. . . . Superbly written.”
— Bestsellerworld.com

“In his first-rate new book he pulls back to expose a shocking panorama of institutional corruption stretching back generations…. English’s outrage at the injustices perpetrated by the Department of Justice is palpable. It’s matched only by his disgust that few responsible will ever be held accountable.”
— Playboy