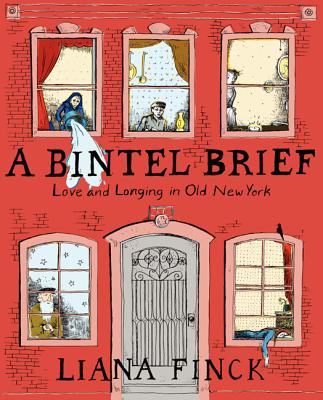 In an illustrative style that is a thrilling mash-up of Art Spiegelman's deft emotionality, Roz Chast's hilarious neuroses, and the magical spirit of Marc Chagall, A Bintel Brief is Liana Finck’s evocative, elegiac love letter to the turn-of-the-century Jewish immigrants who transformed New York City and America itself.

A Bintel Brief "A Bundle of Letters"—was the enormously popular advice column of The Forward, the widely read Yiddish language newspaper begun in 1906 New York. Written by a diverse community of Eastern European Jewish immigrants, these letters spoke to the daily heartbreaks and comedies of their new lives, capturing the hope, isolation, and confusion of assimilation.

Drawn from these letters—selected and adapted by Liana Finck and brought to life in her appealing two-color illustrations—A Bintel Brief is a tour of Lower East Side New York, and includes an imaginative conversation with the Yiddish "Dear Abby," Abraham Cahan, The Forward's legendary editor and creator of the Bintel Brief column.

From premarital sex to family politics to struggles with jobs and money, A Bintel Brief is an enlightening look at a segment of America's rich cultural past that offers fresh insights for our own lives as well.


Praise For A Bintel Brief: Love and Longing in Old New York…

“[One] the most powerful books I’ve read so far this year… Finck’s illustrations intensify the emotional resonance of these letters, invoking the buoyant magic of Marc Chagall, but also sometimes descending into the cramped world of the tenements.”
— NPR's Fresh Air

“[Finck] brings an entirely new dimension to what has become, for modern readers, a portal into a world that feels impossibly distant.”
— The Paris Review (online review)

Taken together, even just these 11 letters provide an invaluable sooty window onto life on the Lower East Side…. “A Bintel Brief” makes you positively hungry to read comparable letters to American immigrant newspapers around the country right now.”
— New York Times

“[A] sharp, evocative style that reminds me sometimes of Ben Katchor and other times of Roz Chast. Finck’s book is more than a collection of advice columns, though-it’s an imaginative leap into the art of nostalgia…I really loved A Bintel Brief.”
— Slate

“A wonderfully illustrated gem of a book…I’ve read that story several times over the years, but rarely savored it quite the way I did with Finck’s book. This is because of the drawings.”
— Tablet

Liana Finck studied fine art and graphic design at Cooper Union College. A former Fulbright fellow and recipient of a Six Points Fellowship for Emerging Jewish Artists, her work has appeared in The New Yorker, The Forward and Tablet, among other publications. She lives in New York City.