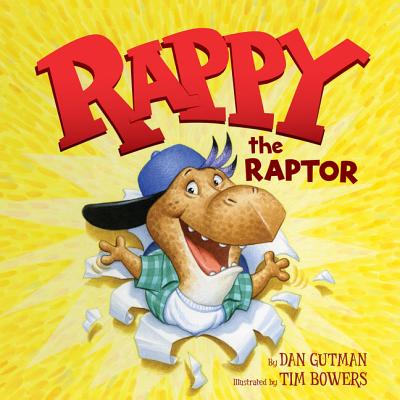 Meet Rappy the Raptor, a velociraptor who speaks in rhymes all of the time, whether it's morning or noon, October or June. Now, how did it happen that he started rappin'? Well, here's Rappy's story in all its glory!

New York Times bestselling author Dan Gutman and New York Times bestselling artist Tim Bowers team up for a funny, warm story that is sure to have readers snapping their fingers and tapping their toes! Parents and kids alike will love bopping along as Rappy learns to embrace his unusual way of speaking in this upbeat picture book with a dino-size beat.

Tim Bowers has illustrated over thirty children’s books, including the New York Times bestsellers Dream Big, Little Pig! by Kristi Yamaguchi and Dinosaur Pet by Neil and Marc Sedaka. His artwork has received much recognition, including the Children’s Choice Award and Junior Library Guild selections. Tim lives with his wife in Granville, Ohio. You can visit him online at www.timbowers.com.