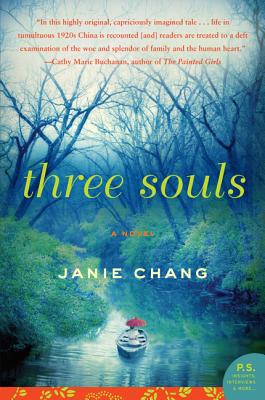 An absorbing novel of romance and revolution, loyalty and family, sacrifice and undying love

We have three souls, or so I'd been told. But only in death could I confirm this....

So begins the haunting and captivating tale, set in 1935 China, of the ghost of a young woman named Leiyin, who watches her own funeral from above and wonders why she is being denied entry to the afterlife. Beside her are three souls—stern and scholarly yang; impulsive, romantic yin; and wise, shining hun—who will guide her toward understanding. She must, they tell her, make amends.

As Leiyin delves back in time with the three souls to review her life, she sees the spoiled and privileged teenager she once was, a girl who is concerned with her own desires while China is fractured by civil war and social upheaval. At a party, she meets Hanchin, a captivating left-wing poet and translator, and instantly falls in love with him.

When Leiyin defies her father to pursue Hanchin, she learns the harsh truth—that she is powerless over her fate. Her punishment for disobedience leads to exile, an unwanted marriage, a pregnancy, and, ultimately, her death. And when she discovers what she must do to be released from limbo into the afterlife, Leiyin realizes that the time for making amends is shorter than she thought.

Suffused with history and literature, Three Souls is an epic tale of revenge and betrayal, forbidden love, and the price we are willing to pay for freedom.


Praise For Three Souls: A Novel…

“Compelling and utterly original. Janie Chang’s riveting debut gives us so much: a complex heroine, a window into the vanished world of pre-Communist China, a fascinating plot and language that sings. An intoxicating story of family, ambition and the risks we take for love.” — NYT Bestselling Author Tara Conklin, author of THE HOUSE GIRL on THREE SOULS

“A triumph. There is so much magic here, such generous imagining. The prose sings while the story is told in surging crescendo that makes us race to know what happens.” — Beverly Swerling, author of City of Dreams and Bristol House on THREE SOULS

“A tour de force. Evocative of Lisa See at her best, Three Souls vividly conjures life in pre-Mao China, and runs the emotional gamut from playful to haunting. This original story and its sympathetic heroine will stay with you long after the final pages.” — Daniel Kalla, author of The Far Side of the Sky and Rising Sun, Falling Shadow on THREE SOULS

“A glorious, deeply readable novel-the kind you pick up and read voraciously, every chance you get. The kind you get lost in.” — Shaena Lambert, author of Radiance and Oh, My Darling on THREE SOULS

“In this highly original, capriciously imagined tale, Song Leiyin journeys to the afterlife in the company of three guiding souls. As her life in tumultuous 1920s China is recounted, readers are treated to a deft examination of the woe and splendour of family and the human heart.” — NYT Bestselling Author Cathy Marie Buchanan, author of The Painted Girls and The Day the Falls Stood Still on THREE SOULS

“I absolutely couldn’t put it down. . . . One of the most satisfying, enjoyable and interesting books I’ve read in a while.” — Nancy Richler, author of The Imposter Bride on THREE SOULS

“Both heartbreaking and hopeful, Janie Chang’s first novel is an immersive and enjoyable read.” — Booklist on THREE SOULS

“A remarkable, exquisite work of historical fiction, Three Souls is highly recommended as a wonderful read and an experience of creative, brilliant writing.” — Historical Novel Society on THREE SOULS

[D]elightful. Chang skillfully weaves China’s story with the fate of her characters, giving the novel a tone of importance that never becomes dull or pedantic.” — Providence Journal on THREE SOULS

“Chang’s heroine is crafty and that’s the biggest strength of this book: we want Leiyin to succeed in her various quests (both in life and in death) because we know so many cards are already stacked against her.” — Asian American Literarature Fans on THREE SOULS

Born in Taiwan, JANIE CHANG has lived in the Philippines, Iran, Thailand, New Zealand and Canada. She writes historical fiction with a personal connection, drawing from family history and ancestral stories. Chang has a degree in computer science and is a graduate of the Writer’s Studio Program at Simon Fraser University. She is the author of Three Souls and Dragon Springs Road.

personalities. What do you think

and collectively? What do you

think their role is in the story?

a time of great turmoil. What

details and descriptions of

ordinary life does the author use

to evoke the social and political

Think about the conflicts that

experienced during this time of

transition. How are they similar

to the experiences of immigrant

women today? How are they

statement about how women

were treated in Chinese society.

Of all the examples showing how

women were oppressed, which

affected you the most, and why?

What new information did you

society, or family dynamics? Were

there any passages or scenes in the

novel that you felt gave you fresh

insights into that time and place?

In Leiyin’s memories of her times

with Hanchin, what tips us off

that he is just toying with her?

Discuss what Leiyin doesn’t see or

won’t acknowledge that she sees.

Throughout Part One, Leiyin is

warned repeatedly to obey her

father. What do we know about

believe he will eventually give in

to her or at least forgive her?

Stepmother the most interesting

secondary character of the novel.

Do you agree? What makes her

so memorable and admirable—

especially given the constraints

of the era and her status in the

The female characters are not

the only ones whose lives are

constrained. Discuss how some

of the male characters are also

In many ways this is a coming-of-

age story—in which the final

coming of age happens after the

protagonist dies. In each of the

three parts of the novel, how does

Leiyin grow and mature? What

does she learn about herself or

the way the world works?

At the end of the novel, do you

think Leiyin will succeed in

ascending to the afterlife? Why

or why not? Do you find the

Consider the structure of the

between past tense and present

tense. Do you feel this is