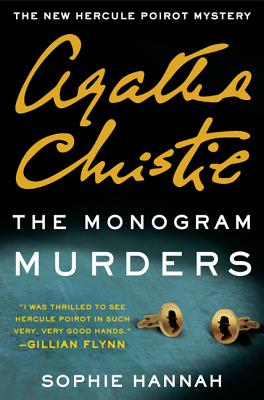 Since the publication of her first novel in 1920, more than two billion copies of Agatha Christie's books have been sold around the globe. Now, for the first time ever, the guardians of her legacy have approved a brand-new novel featuring Dame Agatha's most beloved creation, Hercule Poirot.

Internationally bestselling author Sophie Hannah breathes new life into the incomparable detective. In this thrilling tale, Poirot plunges into a mystery set in 1920s London—a diabolically clever puzzle that will test his brilliant skills and baffle and delight longtime Christie fans and new generations of readers discovering him for the first time. Authorized by Christie's family, and featuring the most iconic detective of all time, this instant Christie classic is sure to be celebrated by mystery lovers the world over.

Sophie Hannah is the New York Times-bestselling author of numerous psychological thrillers, which have been published in 49 countries and adapted for television. She also wrote The Monogram Murders, the first Hercule Poirot novel authorized by the estate of Agatha Christie, and its sequels Closed Casket and The Mystery of Three Quarters.

“Christie herself, some might say, could do no better.... Enough twists, turns, revelations and suspects to cook up a most satisfying red-herring stew. Literary magic.”
— Washington Post

“Does Sophie Hannah’s Poirot live up to our expectations? Yes, he does, and markedly so.... As tricky as anything written by Agatha Christie. The Monogram Murders has a life and freshness of its own. Poirot is still Poirot. Poirot is back.”
— Alexander McCall Smith, New York Times bestselling author of The No. 1 Ladies' Detective Agency

“Sophie Hannah’s idea for a plot line was so compelling and her passion for my grandmother’s work so strong, that we felt that the time was right for a new Christie to be written.”
— Mathew Prichard, grandson of Agatha Christie

“Sharply written and rigorously plotted, this Poirot mystery rivals many of Christie’s own.”
— NPR