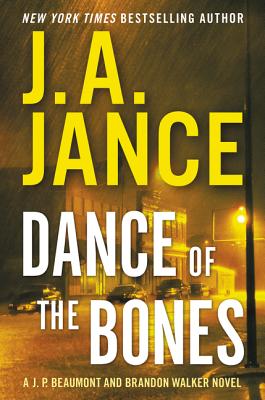 Dance of the Bones

J. P. Beaumont and Brandon Walker, two of New York Times bestselling author J. A. Jance’s most acclaimed series characters, join forces for the first time in one of the most suspenseful works of her career.

Years ago, Amos Warren, a prospector, was gunned down out in the desert and Sheriff Brandon Walker made the arrest in the case. Now, the retired Walker is called in when the alleged killer, John Lassiter, refuses to accept a plea deal that would release him from prison with time served. Lassiter wants Brandon and The Last Chance to find Amos's "real" killer and clear his name.

Sixteen hundred miles to the north in Seattle, J.P. Beaumont is at loose ends after the Special Homicide Investigation Team, affectionately known as S.H.I.T., has been unexpectedly and completely disbanded. When Brandon discovers that there are links between Lassiter’s case and an unsolved case in Seattle, he comes to Beau for help.

Those two cases suddenly become hot when two young boys from the reservation, one of them with close ties to the Walker family, go missing. Can two seasoned cops, working together, decipher the missing pieces in time to keep them alive?


Praise For Dance of the Bones: A J. P. Beaumont and Brandon Walker Novel…

“Jance satisfies fans of both series with an energetic plot resplendent with believable twists, leaving readers eager for Beaumont and Walker’s next outing.” — Publishers Weekly (starred review) on DANCE OF THE BONES

J.A. Jance is the New York Times Bestselling author of more than sixty books. Born in South Dakota and raised in Bisbee, Arizona, she and her husband live in the Seattle area with their two longhaired dachshunds, Mary and Jojo.