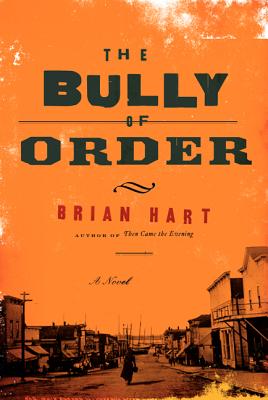 The Bully of Order (Hardcover)

Set in a logging town on the lawless Pacific coast of Washington State at the turn of the twentieth century, a spellbinding novel of fate and redemption—told with a muscular lyricism and filled with a cast of characters Shakespearean in scope—in which the lives of an ill-fated family are at the mercy of violent social and historical forces that tear them apart.

Keen to make his fortune, Jacob Ellstrom, armed with his medical kit and new wife, Nell, lands in The Harbor—a mud-filled, raucous coastal town teeming with rough trade pioneers, sawmill laborers, sailors, and prostitutes. But Jacob is not a doctor, and a botched delivery exposes his ruse, driving him onto the streets in a plunge towards alcoholism. Alone, Nell scrambles to keep herself and their young son, Duncan, safe in this dangerous world. When a tentative reunion between the couple—in the company of Duncan and Jacob’s malicious brother, Matius—results in tragedy, Jacob must flee town to elude being charged with murder.

Years later, the wild and reckless Duncan seems to be yet another of The Harbor’s hoodlums. His only salvation is his overwhelming love for Teresa Boyerton, the daughter of the town’s largest mill owner. But disaster will befall the lovers with heartbreaking consequences.

And across town, Bellhouse, a union boss and criminal rabble-rouser, sits at the helm of The Harbor’s seedy underbelly, perpetuating a cycle of greed and violence. His thug Tartan directs his pack of thieves, pimps, and murderers, and conceals an incendiary secret involving Duncan’s mother. As time passes, a string of calamitous events sends these characters hurtling towards each other in an epic collision that will shake the town to its core.

A native of Idaho, Brian Hart won the Keener Prize for Literature from the University of Texas at Austin and received an MFA from the Michener Center for Writers there. He is the author of the novel Then Came the Evening. His second novel, The Bully of Order, was a finalist for the Chautauqua Prize. He lives in Idaho with his wife and daughter.


Praise For The Bully of Order: A Novel…

“This crackling, lightning-bolt energy and patient attention to even the lowest of characters recalls the work of Denis Johnson…helped along by an energizing sense of humor and a virtuosic control of plot…Hart has created a Dickensian portrait of the barely settled Pacific Northwest.”
— New York Times Book Review

“Brian Hart writes like a dream. In this haunting, often brutal tale of failed fathers and abandoned sons, set in the logging industry a century ago, are scenes of aching beauty.”
— James Magnuson, author of The Hounds of Winter

“Mesmerizing…Hart has conjured a singular, searing world. When you step into this novel you submit to its dream… you believe in his large gift that leaves you stunned and breathless. A wonderful, unique portrait of a particular landscape I now see anew.”
— Amanda Coplin, author of The Orchardist

“Brilliant… Hart paints a vivid picture of the brutality and venality of the old Northwest Territories.”
— Austin American-Statesman

“Hart’s sense of place is brilliant…There are dazzling characterizations…[and] a dense, deep and illuminating narrative…of greed and ambition and of fathers and sons…Think the brutal realities of McCarthy’s Blood Meridian set among the primeval forests of the Pacific Northwest frontier.”
— Kirkus Reviews (starred review)

“Not a writer of half-measures, Hart brilliantly re-creates the rugged life in the Pacific Northwest logging camps of the 1890s. A riveting, powerful tale.”
— Library Journal

“Brian Hart’s THE BULLY OF ORDER does what only the best works of fiction can do: it brilliantly imagines those parts of life that history all too often fails to record. This is a thoroughly engrossing story told in mesmerizing prose. I highly recommend it.”
— Kevin Powers, author of The Yellow Birds

“After a relatively quiet debut, Brian Hart has come back with a stunning second novel-a work would qualify as a lifetime achievement for most writers. You do not have to read very far to see that Brian Hart has vaulted squarely into the first rank of American novelists.”
— Philipp Meyer, author of The Son

“An epic novel of violence, depravity, and mayhem…Brian Hart writes like Cormac McCarthy in overdrive. What talent, what nerve, what a wondrous and spellbinding book. THE BULLY OF ORDER is part creation myth, part apocalyptic thriller, and it’s peopled with charlatans, swindlers, and murderers who will haunt your dreams.”
— John Dufresne, author of No Regrets, Coyote

“Ambitious and beautifully harsh . . . Hart’s stunning language builds into a textured and wonderfully thorny book. . . . Its huge scope and panoramic sympathies make it compelling and immersive...Bully of Order warmed and saddened and wondered me like the life of Huckleberry Finn.”
— Dallas Morning News

“THE BULLY OF ORDER possesses a strange magnetism…its irresistible, multi-layered plotline will tug you all the way through a story that captures the gritty lawlessness of the Northwest’s beginnings.”
— High Country News

“A very robust story about where I’m living now, Oregon. It’s about sheer madness and effort that went into logging in that area of the country in the 1800s. It’s really an epic historical tale, and he’s a fantastic writer.”
— Smith Henderson, author of Fourth of July Creek
or
Not Currently Available for Direct Purchase
Copyright © 2020 American Booksellers Association