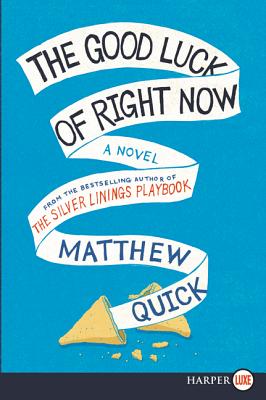 
Praise For The Good Luck of Right Now…

“A gratifying romp….Fans of The Silver Linings Playbook know Quick’s penchant for emotionally troubled, big-hearted characters, and Good Luck will satisfy those readers and new ones alike.”
— People (Three Stars)

“It’s impossible not to love each of these deeply flawed characters….As funny as it is touching, Quick’s latest effort is on par with Silver Linings.”
— USA Today, Four Stars

“A page turner...Easy to read but difficult to characterize. Part fairy tale and part vision quest…[it] could more aptly be called an adult-onset bildungsroman….Quick, a master scene-setter, details Neil’s personal tragedy in prose that is simultaneously funny and devastating.”
— Boston Globe

“Original, compelling, uplifting. Quick celebrates the power of ordinary, flawed human beings to rescue themselves and each other. His writing is shot through with wit and humanity and an ultimately optimistic view of people, without ever becoming sentimental.”
— Graeme Simsion, author of The Rosie Project

“Mr. Quick ventures to the edges of society,...He rewards us with an irresistible urge to think the best of humanity, to understand not only the need to walk in someone else’s shoes but also the altruistic power attained from doing so.”
— Pittsburgh Post-Gazette

“Funny, touching, wise, and ultimately life-affirming, THE GOOD LUCK OF RIGHT NOW is quite possibly the greatest feel-good misfit-road story I’ve had the good luck to read. If you loved THE CURIOUS CASE OF THE DOG IN THE NIGHT-TIME, this book is for you.”
— Garth Stein, author of The Art of Racing in the Rain

“Everything I relish in a story: a flawed but sympathetic protagonist, a page-turning plot, and a cast of emotionally scarred characters for whom I rooted wholeheartedly. I loved this novel from its quirky and unconventional opening to its poignant, tear-inducing conclusion.”
— Wally Lamb, author of We are Water and Wishin' and Hopin'

“A knockout of a book that has something for everyone: humor, wisdom, plot twists, wholly original characters and Richard Gere.”
— BookPage

“Life-affirming….Begins as a character study and morphs into a road novel, blending humorous set pieces-pack a Canadian hotel with UFO abductees and there’s bound to be fun-with poignant revelations about the novel’s main characters. It’s an unabashed tear-jerker.”
— Minneapolis Star Tribune

“[Quick] has a rare skill in portraying characters with mental illness, which, when coupled with his deft hand at humor, produces compelling and important prose….fans of Wally Lamb, Mark Haddon, or Winston Groom will appreciate.”
— Library Journal

“Quick returns to his offbeat, optimistic view of the world as only he can….an endearing celebration of the human spirit….Fans of bestselling author Matthew Quick’s The Silver Linings Playbook and its Academy Award-winning film adaptation will not be disappointed.”
— Fort Worth Star-Telegram

“Quick, the author of The Silver Linings Playbook, provides another offbeat gem populated with eccentric, fallible, intensely human characters….Humor, pathos, and quirky bends in the road define they odyssey, making it increasingly clear that it is all about the journey, not the destination.”
— Booklist

“Often funny, with humor that arises naturally from Bartholomew’s deadpan, literal view of the world….It’s easy to wish the best for Bartholomew.”
— Columbus Dispatch

“A gentle, wise, poignant and funny story about the nature of reality and the daily strength required of the brokenhearted to live in it. Quick makes no misstep; each scene, each character, each storyline is perfectly realized and seamlessly woven into the narrative….A delight from beginning to end.”
— Nashville Scene

“Quirky, compelling….Reads rather like A Confederacy of Dunces removed 1,200 miles northeast. As with that novel, it’s impossible to come away unamused by The Good Luck of Rights Now’s kindhearted presentation of the misadventures of a damaged soul.”
— Philadelphia Inquirer

“This book channels the same screwball sad sweetness we loved so much in Silver Linings.”
— GQ.com, "The 8 Books You Need to Know This Month"

“A deeply nuanced portrait of an unconventional family unit, friendships of necessity, and life’s give and take.”
— Nylon Magazine

“Often marked as ‘crazy’ by those around them, [Quick’s] oddball protagonists…say out loud-and act upon-thoughts many of us have had, if perhaps kept inside….[With] The Good Luck of Right Now, Quick has done it again.”
— Nashville Tennessean

“A quirky coming-of-age story….Quick writes with an engaging intimacy, capturing his narrator’s innocence and off-kilter philosophy, and the damaged souls in orbit around him.”
— Publishers Weekly

“The Good Luck of Right Now will inspire and entertain with the power of kindness, love and even the universe….a very enjoyable read for me, so much so that I delayed reading the final chapters not wanting it to end.”
— Burlington Times-News

“A plucky debut novel…Quick fills the pages with so much absurd wit and true feeling that it’s impossible not to cheer for his unlikely hero.”
— People on The Silver Linings Playbook

“Pat is a fearless narrator; even his most outlandish delusions are so candidly expressed that the reader teeters between fear of heartbreak and the hope that Pat might actually yearn his way into happiness. It’s a charmingly nerve-wracking combination…The book is cinematic, but the writing still shimmers.”
— Barry Hardymon, NPR on The Silver Linings Playbook

“I found him [Pat Peoples] compelling and fascinating, and I found myself not only caring about him but rooting for him unashamedly, which, for an author is, I believe, what they mean by scoring a tour de force.”
— Philadelphia Inquirer on The Silver Linings Playbook

“Friendship, family, connection and discovery intertwine in a marvelous way in this appealing novel. … In refusing to be defeated by pessimism, Pat learns about true silver linings, not pretty happy endings.”
— Marilyn Dahl, Shelf Awareness on The Silver Linings Playbook, a Picks of the Year Selection

“Endearing…touching and funny.… Pat [Peoples] is as sweet as a puppy, and his offbeat story has all the markings of a crowd-pleaser.”
— Publishers Weekly on The Silver Linings Playbook

“Not just a postbag of whimsical letters; it’s also a bildungsroman….A tender tale that manages to be both light-hearted and philosophical.”
— Financial Times

“Grade: A. Picking up a Matthew Quick novel is a lot like going to your favorite restaurant. You just know it is going to be good.”
— Boston Herald
or
Not Currently Available for Direct Purchase
Copyright © 2020 American Booksellers Association