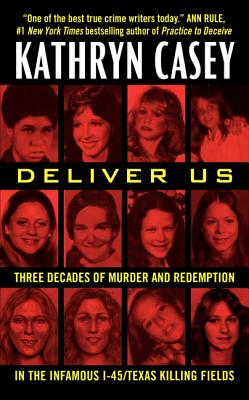 Over a three-decade span, more than twenty women—many teenagers—died mysteriously in the small towns bordering Interstate 45, a fifty-mile stretch of highway running from Houston to Galveston. The victims were strangled, shot, or savagely beaten. Six met their demise in pairs. They had one thing in common: being in the wrong place at the wrong time.

The day she vanished, Colette Wilson waited for her mother after band practice. Best friends Debbie Ackerman and Maria Johnson loved to surf and were last seen hitchhiking. Laura Kate Smither dreamed of becoming a ballerina and disappeared just weeks before her thirteenth birthday.

In this harrowing true crime exposition, award-winning journalist Kathryn Casey tracks these tragic cases, investigates the evidence, interviews the suspects, and pulls back the cloak of secrecy in search of elusive answers.

Kathryn Casey is an award-winning journalist, who has written for Rolling Stone, TV Guide, Reader's Digest, Texas Monthly, and many other publications. She's the author of seven previous true crime books and the creator of the highly acclaimed Sarah Armstrong mystery series. Casey has appeared on Oprah, Oprah Winfrey's Oxygen network, Biography, Nancy Grace, E! network, truTV, Investigation Discovery, the Travel Channel, and A&E. She lives in Houston with her husband and their dog, Nelson.


Praise For Deliver Us: Three Decades of Murder and Redemption in the Infamous I-45/Texas Killing Fields…

“A true crime classic! A chilling study where both the victim and the stalker are bizarre and inscrutable...by one of the best in the true crime genre.”
— Ann Rule
or support indie stores by buying on
Copyright © 2020 American Booksellers Association