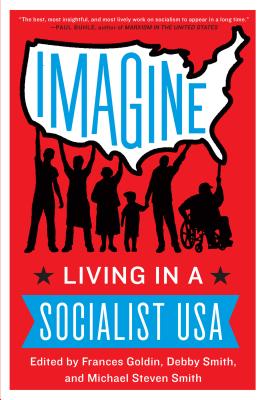 Living in a Socialist USA

The polar ice caps are melting, hurricanes and droughts ravish the planet, and the earth's population is threatened by catastrophic climate change. Millions of American jobs have been sent overseas and aren't coming back. Young African-American men make up the majority of America's prison population. Half of the American population are poor or near poor, living precariously on the brink, while the top one percent own as much as the bottom eighty. Government police-state spying on its citizens is pervasive. Consequently, as former President Jimmy Carter has said, "we have no functioning democracy."

Imagine: Living In a Socialist U.S.A., edited by Francis Goldin, Debby Smith, and Michael Steven Smith, is at once an indictment of American capitalism as the root cause of our spreading dystopia and a cri de coeur for what life could be like in the United States if we had economic as well as a real political democracy. This anthology features essays by revolutionary thinkers, activists, and artists—including Academy Award-winning filmmaker Michael Moore, civil rights activist Angela Davis, incarcerated journalist Mumia Abu Jamal, and economist Rick Wolff— addressing various aspects of a new society and, crucially, how to get from where we are now to where we want to be, living in a society that is truly fair and just.


Praise For Imagine: Living in a Socialist USA…

Part history, part analysis, part call to action, Imagine: Living in a Socialist USA, is a roadmap for anyone troubled by the social, political and economic inequities plaguing this country and the world.
— —Heidi Boghosian, Executive Director, National Lawyers Guild

IMAGINE: LIVING IN A SOCIALIST USA is the book so many of us have been waiting for. ...exquisitely timely... We must profoundly change the way we live, or we will not survive.
— Alice Walker