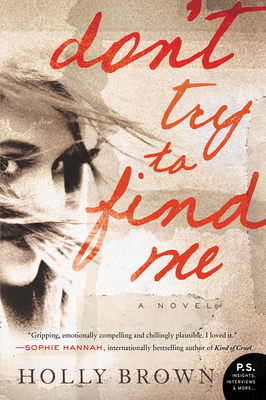 Don't Try To Find Me

When a fourteen-year-old runs away, her parents turn to social media to find her—launching a public campaign that will expose their darkest secrets and change their family forever, in this suspenseful and gripping debut for fans of Reconstructing Amelia and Gone Girl.

Don’t try to find me. Though the message on the kitchen white board is written in Marley’s hand, her mother Rachel knows there has to be some other explanation. Marley would never run away.

As the days pass and it sinks in that the impossible has occurred, Rachel and her husband Paul are informed that the police have “limited resources.” If they want their fourteen-year-old daughter back, they will have to find her themselves. Desperation becomes determination when Paul turns to Facebook and Twitter, and launches FindMarley.com.

But Marley isn’t the only one with secrets.

With public exposure comes scrutiny, and when Rachel blows a television interview, the dirty speculation begins. Now, the blogosphere is convinced Rachel is hiding something. It’s not what they think; Rachel would never hurt Marley. Not intentionally, anyway. But when it’s discovered that she’s lied, even to the police, the devoted mother becomes a suspect in Marley’s disappearance.

Is Marley out there somewhere, watching it all happen, or is the truth something far worse?


Praise For Don't Try To Find Me: A Novel…

“Don’t Try to Find Me will have you turning pages into the night, desperate to learn the terrible secrets mother and daughter are hiding! This gripping debut novel is a mother’s worst nightmare.” — Dorothea Benton Frank, New York Times bestselling author

“Impossible to put down. You’ll be begging friends, family, your book club, and maybe even your therapist (if you have one) to read DON’T TRY TO FIND ME. It’s the real thing.” — Meg Cabot, New York Times bestselling author

Holly Brown lives with her husband and toddler daughter in the San Francisco Bay Area, where she's a practicing marriage and family therapist. She is the author of the novel Don't Try to Find Me, and her blog, "Bonding Time," is featured on the mental health website PsychCentral.com.