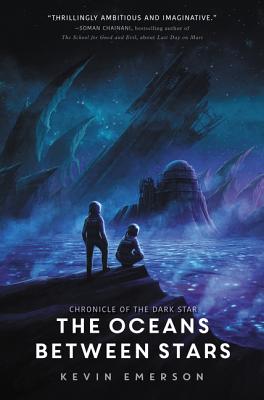 The Oceans between Stars (Chronicle of the Dark Star #2)

"Thrillingly ambitious and imaginative." —Soman Chainani, bestselling author of The School for Good and Evil, about Last Day on Mars

It is Earth year 2223, but the Earth, along with the entire solar system, is gone.

Liam and Phoebe, having barely escaped our exploding sun with their lives, are in stasis for the decade-long journey to the rogue planet Delphi, where they hope to meet up with the rest of the human refugees, find help for their injured parents, and pass along the devastating things they discovered on Mars: that someone destroyed their world intentionally, and that that someone might still be after them, trying to finish the job.

Phoebe is carrying her own dark secret. One that finds her waking up secretly at various points in their journey, changing their path through space. One that will decide the fate of the human race, and many more besides. One that, very soon, she must reveal to Liam, whether he’s ready for the truth or not.

The second volume in Kevin Emerson's thrilling sci-fi epic is a bold and terrifying quest into the outer reaches of time and space—one that will change our heroes, and their friendship, forever.

“Thrills, violence, time/space questions, and some contemplation about colonization make for action on the thoughtful side.”
— Kirkus Reviews

“With the same enthralling, cinematic pacing he used in Last Day on Mars, Emerson unspools nail-biting suspense. Through all the engrossing sci-fi action, however, Emerson keeps the plot solidly grounded in the characters, who are vivid and complex. A cliff-hanger ending promises deepening adventures in forthcoming volumes.”
— ALA Booklist

“[A] well-written and exciting sequel. Emerson, who has clearly done his research, uses humor and age-appropriate metaphors to present the science in a way that readers will be able to understand.”
— School Library Journal