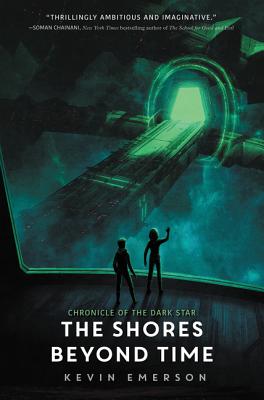 The Shores Beyond Time (Chronicle of the Dark Star #3)

It is Earth year 2256—but the fate of the few who even remember Earth is perilously in doubt. Mina Saunders-Chang and many of the surviving humans are stranded in the Centauri system, having barely survived their confrontation with the Telphon refugees. Now everyone—human and Telphon alike—is caught in the blast zone of the Centauri supernova. And yet there’s only one question Mina is asking:

Where are Liam and Phoebe?

Having barely made it through the battle at the Centauri system with their lives, Liam and Phoebe awake on a mysterious ship in the middle of a dead universe. The ship bears the markings of a human starliner that disappeared decades ago—but even more disturbing than that is the massive alien machine floating in the starless space before them.

A machine long abandoned but now showing signs of life. A machine that has begun speaking to Liam in a voice only he can hear. . . .

Kevin Emerson is the author of the acclaimed novel Last Day on Mars and its sequels in the Chronicle of the Dark Star. He has written thirteen middle grade novels, including The Fellowship for Alien Detection, the Oliver Nocturne Series, and Lost in Space: Return to Yesterday (based on the Netflix series), as well as eight young adult novels, including The Atlanteans trilogy and Any Second. A former science teacher, Kevin is also a drummer and singer, most recently with his band Model Shop. He lives with his family in Seattle, Washington. You can visit him online at www.kevinemerson.net.