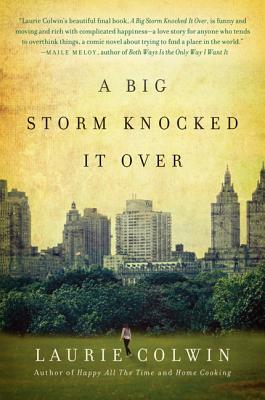 A Big Storm Knocked It Over (Paperback)

In her fifth and final novel, acclaimed author Laurie Colwin explores marriage and friendship, motherhood and careers, as experienced by a cast of delightfully idiosyncratic Manhattanites. At once a hilarious social commentary and an insightful, sophisticated modern romance, A Big Storm Knocked It Over stands as a living tribute to one of contemporary fiction’s most original voices.

Laurie Colwin is the author of five novels: Happy All the Time; Family Happiness; Goodbye Without Leaving; Shine On, Bright and Dangerous Object; and A Big Storm Knocked It Over; three collections of short stories: Passion and Affect, Another Marvelous Thing, and The Lone Pilgrim; and two collections of essays: Home Cooking and More Home Cooking. She died in 1992.


Praise For A Big Storm Knocked It Over: A Novel…

"Laurie Colwin was utterly fearless in writing about happiness. . . . The novel makes the idea of happy endings for decent people seem entirely plausible, almost inevitable—no small feat for a writer these days and no small pleasure for a reader.:
— New York Times

"From the first sentence of A Big Storm Knocked It Over, beguiling words and an engaging ambience combine to seduce us."
— Washington Post Book World

“Laurie Colwin’s beautiful final book, A Big Storm Knocked It Over, is funny and moving and rich with complicated happiness-a love story for anyone who tends to overthink things, a comic novel about trying to find a place in the world.”
— Maile Meloy, author of Both Ways Is the Only Way I Want It

“I’ve read and re-read every book by Laurie Colwin. Acutely observed, beautifully written, witty, and profound--each one is a delight.”
— Gretchen Rubin, author of Happier at Home and The Happiness Project
or support indie stores by buying on
Copyright © 2020 American Booksellers Association