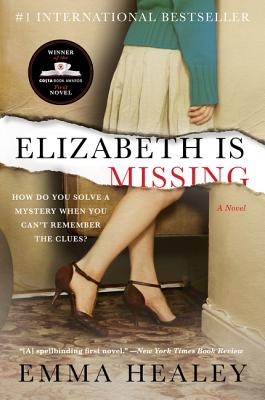 In this darkly riveting debut novel—a sophisticated psychological mystery that is also an heartbreakingly honest meditation on memory, identity, and aging—an elderly woman descending into dementia embarks on a desperate quest to find the best friend she believes has disappeared, and her search for the truth will go back decades and have shattering consequences.

Maud, an aging grandmother, is slowly losing her memory—and her grip on everyday life. Yet she refuses to forget her best friend Elizabeth, whom she is convinced is missing and in terrible danger.

But no one will listen to Maud—not her frustrated daughter, Helen, not her caretakers, not the police, and especially not Elizabeth’s mercurial son, Peter. Armed with handwritten notes she leaves for herself and an overwhelming feeling that Elizabeth needs her help, Maud resolves to discover the truth and save her beloved friend.

This singular obsession forms a cornerstone of Maud’s rapidly dissolving present. But the clues she discovers seem only to lead her deeper into her past, to another unsolved disappearance: her sister, Sukey, who vanished shortly after World War II.

As vivid memories of a tragedy that occurred more fifty years ago come flooding back, Maud discovers new momentum in her search for her friend. Could the mystery of Sukey’s disappearance hold the key to finding Elizabeth?


Praise For Elizabeth Is Missing: A Novel…

“[A] knockout debut…. Ms. Healey’s audacious conception and formidable talent combine in a bravura performance that sustains its momentum and pathos to the last.”
— Wall Street Journal

“Maud Horsham, the narrator of Emma Healey’s spellbinding first novel…is aware that she’s slipping into dementia…. It’s a sad and lonely business watching your identity slowly slip away. But even at the end, Maud insists on making herself heard and understood.”
— New York Times Book Review

“This is no conventional crime novel but a compelling work that crosses literary genres. Maud’s experience of dementia is harrowing at times, especially in comparison to her completely lucid moments. The two mysteries at the heart of the book, too—one experienced as a girl and the other as an elderly woman—are brilliantly handled. The result is bold, touching and hugely memorable.”
— Sunday Times (London)

“Elizabeth Is Missing is every bit as compelling as the...hype suggests.... The novel is both a gripping detective yarn and a haunting depiction of mental illness, but also more poignant and blackly comic than you might expect.”
— The Observer (London)

“Not only have we several genres in the one novel, we have two main themes. How it feels to experience dementia, and a page-turner of a detective story. If I had to describe it in one word, it would be beautiful. It is a gripping thriller, but it’s also about life and love: the love of an exasperated daughter for her mother; the love of sisters and of friends and the love I felt for Maud.”
— The Independent (London)

“A compelling read, Elizabeth is Missing offers added depth of mystery and suspense along with aptly portraying a family trying to cope with illness.”
— New York Journal of Books

“Maud’s memory is failing, slipping further away each day. So how can she convince anyone that her best friend is truly missing?…A poignant novel of loss.”
— Kirkus Reviews

“Healey is able to imagine and empathize on such a level because she’s simply a brilliant writer. Let’s hope we hear much more from her over the years.”
— BookPage

“A gripping mystery…this bears comparison to A Curious Incident of the Dog in the Night-Time and S. J. Watson’s Before I Go to Sleep.
— The Bookseller, “Ones to Watch”

“Elizabeth is Missing will stir and shake you: an investigation into a seventy-year-old crime, through the eyes of the most likeably unreliable of narrators. But the real mystery at its compassionate core is the fragmentation of the human mind.”
— Emma Donoghue

“Ingeniously structured and remarkably poignant…. A riveting story of friendship and loss that will have you compulsively puzzling fact from fiction as you race to the last page.”
— Kimberly McCreight, New York Times bestselling author of Reconstructing Amelia, Where They Found Her, and A Good Marriage

“A thrillingly assured, haunting and unsettling novel, I read it at a gulp.”
— Deborah Moggach, author of The Best Exotic Marigold Hotel

“This novel genuinely is one of those semi-mythical beasts, the book you cannot put down.”
— Jonathan Coe, author of The Rotter’s Club

What interesting and complex narrative effects result from

the narrator having such difficulty with her memory?

How does the consistent shift from present to past affect

the telling of the story? How does the author transition

In Chapter 1 there are several allusions to Little Red Riding Hood. In

what ways might this fairy tale be relevant to the story?

Carla, one of Maud’s caregivers, often tells of horrible crimes she’s read about

in the news. What does this add to the novel? How does it affect Maud?

What is the difference between something or someone being missing,

causes—affect the people and relationships in the novel?

What is the importance and effect of “the mad woman” throughout

Both Douglas and Frank seemingly have moments of menace and

kindness. Compare and contrast them.

In Chapter 10, Maud, having forgotten what room she was headed to,

says, “I must be going mad.” Compare and contrast her with “the mad

What does the subject of Maud’s childhood illness add to the story?

Throughout her life, but especially once her sister Sukey goes missing,

to possess meaning or value?

At one point, speaking to Frank, Maud denies she has secrets, but then

admits to liking the idea. How might secrets be important? How can

Late in the novel, Maud touches something of her sister’s and says, “The

contact makes it possible to breathe again.” What is she experiencing?

Consider the Epilogue. What is the effect of ending the novel with the