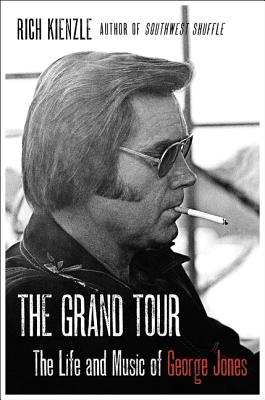 The Life and Music of George Jones

In the vein of the classic Johnny Cash: The Life, this groundbreaking work explores the wild life and extraordinary musical career of “the definitive country singer of the last half century” (New York Times), who influenced, among others, Bob Dylan, Buck Owens, Emmylou Harris, John Fogerty, George Strait, Alan Jackson, and Garth Brooks.

The George Jones of this heartfelt biography lived hard before finding contentment until he died at eighty-one—a story filled with whiskey, women and drugs but always the saving grace of music.

Illustrated with eight pages of photos.

Veteran country music critic, journalist, and historian Rich Kienzle is the author of Southwest Shuffle: Pioneers of Honky-Tonk, Western Swing, and Country Jazz and Great Guitarists: The Most Influential Players in Blues, Country Music, Jazz and Rock. A contributing editor and columnist at Country Music magazine for nearly twenty-five years, he also edited their history publication The Journal. He was formerly a contributing editor at No Depression and Guitar World and is now a regular contributor to Vintage Guitar Magazine. His work has appeared in Fretboard Journal, Guitar Player, Request, The Journal of Country Music, and the Austin American-Statesman. The author of liner notes for almost four hundred reissue albums, Kienzle is among the few country journalists profiled in The Grove Dictionary of American Music. He received the International Country Music Conference’s Charlie Lamb Award for Excellence in Country Music Journalism in 2012.


Praise For The Grand Tour: The Life and Music of George Jones…

“The Grand Tour...doesn’t shy away from shining light into the dark corners or giving the highlights of the late George Jones’ life a close, critical look.”
— Winnipeg Free Press

“[The Grand Tour] is perhaps the most honest portrayal of one of music’s most controversial figures.”
— Library Journal

“Rich Kienzle’s comprehensive bio of George Jones is a great read and a dispassionate chronicle of his drive-in movie of a life.”
— Vintage Guitar Review
or support indie stores by buying on
Copyright © 2020 American Booksellers Association