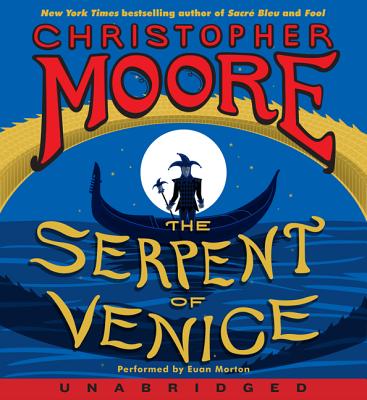 Venice, a really long time ago. Three prominent Venetians await their most loathsome and foul dinner guest, the erstwhile envoy from Britain who also happens to be a favorite of the Doge: the rascal-Fool Pocket. This trio of cunning plotters have lured Pocket to a dark dungeon, promising a spirited evening. Their invitation is, of course, bogus. These scoundrels have something far less amusing planned for the man who has consistently foiled their quest for power and wealth. But this Fool is no fool . . .

Once again, Christopher Moore delivers a rousing literary satire: a dramedy mash-up rich with delights, including (but not limited to): foul plots; counterplots; true love; jealousy; murder; betrayal; revenge; codpieces; a pound of flesh; occasional debauchery; and water (lots of water). Not to mention a cast Shakespeare himself would be proud of: Shylock; Iago; Othello; a bunch of other guys whose names end in "o"; a trio of comely wenches; the brilliant Fool; his large sidekick, Drool; Jeff, the pet monkey; a lovesick sea serpent; and a ghost (yes, there's always a bloody ghost).

Wickedly witty and outrageously inventive, The Serpent of Venice pays cheeky homage to the Bard and illuminates the absurdity of the human condition as only Christopher Moore can.