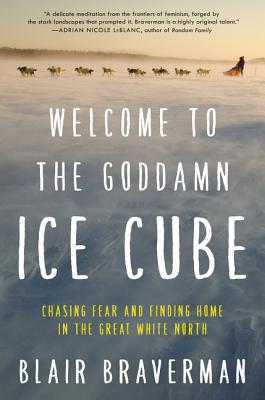 Welcome to the Goddamn Ice Cube

Chasing Fear and Finding Home in the Great White North

“The brilliant and engaging writing in this memoir belies the author's young age. Braverman offers a taut and honest recounting of a young woman fiercely chasing down her dream and confronting myriad dangers -- both natural and man-made -- with intelligence and grit. This white-knuckle read left me in awe of Braverman's conviction, and her lyrical rendering of the landscape of Alaska took my breath away.”
— Katie McGrath (W), Arcadia Books, Spring Green, WI
View the List

A rich and revelatory memoir of a young woman reclaiming her courage in the stark landscapes of the north.

By the time Blair Braverman was eighteen, she had left her home in California, moved to arctic Norway to learn to drive sled dogs, and found work as a tour guide on a glacier in Alaska. Determined to carve out a life as a “tough girl”—a young woman who confronts danger without apology—she slowly developed the strength and resilience the landscape demanded of her.

By turns funny and sobering, bold and tender, Welcome to the Goddamn Ice Cube brilliantly recounts Braverman’s adventures in Norway and Alaska. Settling into her new surroundings, Braverman was often terrified that she would lose control of her dog team and crash her sled, or be attacked by a polar bear, or get lost on the tundra. Above all, she worried that, unlike the other, gutsier people alongside her, she wasn’t cut out for life on the frontier. But no matter how out of place she felt, one thing was clear: she was hooked on the North. On the brink of adulthood, Braverman was determined to prove that her fears did not define her—and so she resolved to embrace the wilderness and make it her own.

Assured, honest, and lyrical, Welcome to the Goddamn Ice Cube paints a powerful portrait of self-reliance in the face of extraordinary circumstance. Braverman endures physical exhaustion, survives being buried alive in an ice cave, and drives her dogs through a whiteout blizzard to escape crooked police. Through it all, she grapples with love and violence—navigating a grievous relationship with a fellow musher, and adapting to the expectations of her Norwegian neighbors—as she negotiates the complex demands of being a young woman in a man’s land.

Weaving fast-paced adventure writing and ethnographic journalism with elegantly wrought reflections on identity, Welcome to the Goddamn Ice Cube captures the triumphs and the perils of Braverman’s journey to self-discovery and independence in a landscape that is as beautiful as it is unforgiving.


Praise For Welcome to the Goddamn Ice Cube: Chasing Fear and Finding Home in the Great White North…

“Her descriptions of the natural world are arresting, and powerfully convey her conviction that ‘how to be cold’ means ‘how to live.’”
— The New Yorker

“As a storyteller and a stylist, Braverman is remarkably skilled, with a keen sense of visceral detail that borders on sublime. Her ability to draw readers into heart-pounding action sequences is what makes the book so courageous and original as a travel narrative and a memoir of self-discovery.”
— New York Times Book Review

“Remarkable. . . . It’s amazing to watch as she develops backbone and grit, determined not to let anyone or anything stand between her and the icy landscape she loves so much.”
— Entertainment Weekly

“This summer, readers have their pick of female narrators traversing both internal and external terrain. But few stand out as much as Blair Braverman’s Arctic memoir, Welcome to the Goddamn Ice Cube.”
— Outside

“Braverman left her California home at 18 to learn dog sledding in Norway. As she chronicles in this bold adventure memoir, she’s returned again and again to the coldest places on earth in search of a fearlessness frequently off-limits to women.”
— O Magazine

“. . . a richly insightful work whose bold but delicately delivered honesty has much to teach us. . . . Welcome to the Goddamn Ice Cube is gorgeous, moving and universally resonant. Most of all, it’s important.”
— Huffington Post

“A thoughtful meditation on a lifelong attraction to the cold.”
— Boston Globe

“a lyrical, understated writer. . . . [an] unusual memoir [that] will resonate with anyone who has ever chased a dream through a thicket of difficulty.”
— Minneapolis Star Tribune

“Blair Braverman confronts hostility and harassment in her memoir of adventure in the wilderness.”
— The New Republic

“Stunning. . . . We feel, acutely, the moments and images Braverman shares with us, but we also take in the years of perspective, of carefully honed wisdom, that she brings to them. Braverman’s descriptions are stippled with terror and beauty.”
— Bitch

“This book could be described in a dozen different ways, but no description would get at root of this book, which is about gender and violence and belonging, but most of all about being human and learning to live—and trust oneself—in world where things aren’t always safe.”
— Brevity Magazine

"In a new book, Blair Braverman describes a life spent obsessed with the frozen north, and the sexual violence she encountered in that male"
— The Guardian

“Compulsively readable. . . . Braverman’s debut beautifully portrays what it’s like to be a woman in an unwelcoming climate.”
— Electric Literature

“An award for straightforward storytelling should be named after [Braverman]. . . a fascinating read. . . . a strange, remarkable memoir.”
— AV Club

“Her easy, lyrical prose makes this search for identity and self a worthwhile read.”
— Publishers Weekly

“Readers will likely find that “ice cubes” are not the point, but rather the risky choices made while growing up and the struggles faced along the way.”
— Booklist

“The next must-read for those who were fans of Cheryl Strayed’s Wild and for those with a daring spirit or those hoping to have more of one.”
— Green Bay Gazette

“Stunning. . . . Braverman exposes all of her desires, insecurities and triumphs in a compulsively readable tangle of raw nerves, brutal honesty, and biting wit. She allows room for not just her inner strength, but her doubts and fears, striking a balance that brings her story into vivid focus.”
— The Maine Edge

“The best work of non-fiction I’ve read in 2016, Welcome to the Goddamn Ice Cube is this year’s H is For Hawk.”
— Library Bound

“If finishing Wild left a hole in your heart, we’re willing to bet that Welcome to the Goddamn Ice Cube might be just the thing.”
— Bookish

“A delicate meditation from the frontiers of feminism, forged by the stark landscapes that prompted it. Braverman is a highly original talent.”
— Adrian Nicole LeBlanc, author of Random Family: Love, Drugs, Trouble, and Coming of Age in the Bronx

“Braverman has written a brilliant troubling of travel writing, of the exotic and the familiar and even of the self that survives to tell the tale. An astonishing debut.”
— Jeff Sharlet, author of The Family

“Like a 21st-century feminist reincarnation of Jack London, Braverman has crafted an eloquent and gripping tale of self-knowledge that leads through communion with ice and sea, dogs and sleds, and finds her, finally, at home amid the complex kindness of other human beings.”
— Sara Marcus, author of Girls to the Front

“Blair Braverman writes beautifully and baldly about the struggle to trust ourselves, especially as we’re undermined by those who hope we won’t. Braverman will stun you with the incredible events of her young life and her fierce courage.”
— Mac McClelland, author of Irritable Hearts

“An extraordinary debut, Ice Cube takes us to the coldest place on earth only to reveal its author’s warm, witty, invincible heart.”
— Jennifer Finney Boylan, author of She's Not There and Stuck in the Middle With You

“Blair Braverman has a poet’s heart. She keeps it in a rawhide pouch on her dogsled. Tough, bracing, visionary and epic, her book also manages to be tender and beautiful. You must read it.”
— Luis Alberto Urrea, author of The Devil's Highway

“A gripping coming-of-age memoir. Braverman captures brilliantly the challenges and ecstasies of life as a young woman in the frigid, male-dominated worlds of Norway and Alaska. A wonderful book about deep friendships—with humans, dogs and the icy north itself.”
— Rob Nixon, author of Slow Violence and the Environmentalism of the Poor

Blair Braverman graduated from the University of Iowa’s Nonfiction Writing Program, where she was also an Arts Fellow. She has been a resident fellow at Blue Mountain Center and the MacDowell Colony and her work has appeared in Buzzfeed, The Atavist, The Best Women’s Travel Writing, Orion, AGNI, High Country News, Waging Nonviolence, and on This American Life. She lives in Mountain, Wisconsin.