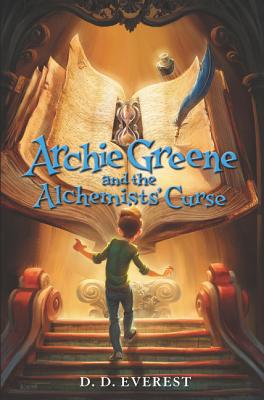 Archie Greene and the Alchemists' Curse

Archie Greene and his fellow Flame Keepers return in the action-packed sequel to Archie Greene and the Magician’s Secret. Middle grade readers will love this new installment in a favorite fantasy series. Perfect for fans of Linda Sue Park’s Wing and Claw and J. A. White’s Thickety series.

It’s been nearly three hundred years since anyone’s received the Golden Circle firemark, but when the symbol appears on Archie’s palm, it marks the resurgence of the Alchemists’ Club and its dreaded curse.

Archie Greene is doomed, and he’s got the firemark to prove it. The last time the Golden Circle appeared, the marked apprentices were never heard from again. The rebirth of the Alchemists’ Club is met with uneasiness, but it’s clear the present is not so different from the past. The charms protecting the magical texts the Flame Keepers have sworn to look after are fading.  If the spells are not rewritten, the little magic left in the world may fall into the hands of the dangerous Greaders.

But can Archie and his friends rewrite the magic in time or will the Alchemists’ curse strike once more?

D. D. Everest is a successful journalist and author. He thought he knew how to write books until he started this one. It is his first book for children and nearly killed him, which serves him right.

He lives in a rambling Victorian house on the Ashdown Forest, in England, with his partner, Sara, their son and daughter, and two cats.