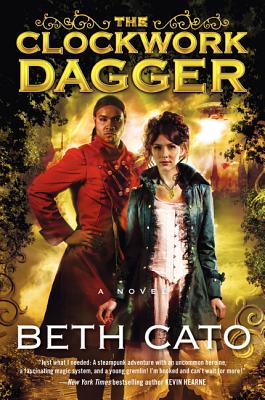 A Novel (A Clockwork Dagger Novel #1)

Full of magic, mystery, and romance, an enchanting steampunk fantasy debut in the bestselling vein of Trudi Canavan and Gail Carriger.

Orphaned as a child, Octavia Leander was doomed to grow up on the streets until Miss Percival saved her and taught her to become a medician. Gifted with incredible powers, the young healer is about to embark on her first mission, visiting suffering cities in the far reaches of the war-scarred realm. But the airship on which she is traveling is plagued by a series of strange and disturbing occurrences, including murder, and Octavia herself is threatened.

Suddenly, she is caught up in a flurry of intrigue: the dashingly attractive steward may be one of the infamous Clockwork Daggers—the Queen’s spies and assassins—and her cabin-mate harbors disturbing secrets. But the danger is only beginning, for Octavia discovers that the deadly conspiracy aboard the airship may reach the crown itself.

“This rousing tale... keeps itself grounded with a story as disarming and forthright as its appealingly capable heroine. ...Ample action and a delectably delayed romance propel the story toward a riveting finale, marking Cato as an author to watch.” — Publishers Weekly

“Beth Cato handles this heady mix with a fine sense of language, emotion, and event, making the whole thing flow more like a force of nature than the work of a first novelist.” — Locus

“The Clockwork Dagger was an immensely fun and entertaining novel... and kept me hooked into the narrative and turning the pages at a dogged pace.... I’m looking forward to picking up Octavia and Alonzo’s story in The Clockwork Crown.” — SFFWorld

“A light read that ... may offer an interesting new world to readers who enjoy the flavor of steampunk fantasy and soap-opera intrigue.” — Kirkus Reviews

“[A] captivating read with fantastic contraptions, an intricate plot, and imagery so colorful and vivid it will make readers wish the internal combustion engine had never been invented.” — Arizona Daily Star

“The Clockwork Dagger was just what I needed: A steampunk adventure with an uncommon heroine, a fascinating magic system, and a young gremlin! I’m hooked and can’t wait for more Octavia and Leaf!” — New York Times bestselling author Kevin Hearne

“DR. QUINN meets DREADNOUGHT in this thrilling, delightful tale combining the political stakes of epic fantasy, the airships and corsets of steampunk, and the heartwarming joy of romance. Excellent fun for lovers of Cherie Priest and Scott Westerfeld.” — Michael R. Underwood, author of GEEKOMANCY

“The Clockwork Dagger had me at hello and kept me with unexpected twists, intriguing magic and splendid betrayals. At the satisfying conclusion, my immediate impulse was to enquire in tones of gentle inquiry, when do I get to read the sequel!?!?” — C. E. Murphy