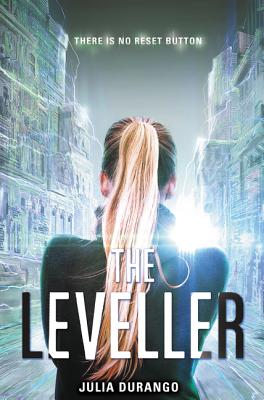 Gamers and action fans of all types will dive straight into the MEEP, a virtual-reality gaming world, thanks to Julia Durango's cinematic storytelling. A touch of romance, constant twists, and a vivid, multidimensional journey through a tricked-out virtual city will keep readers flying through to the breathtaking end.

Nixy Bauer is used to her classmates being very, very unhappy to see her. After all, she's a bounty hunter in a virtual-reality gaming world—and she's frequently hired by irritated parents to pull kids out of the mazelike MEEP universe.

But when the game's billionaire developer loses track of his own son in the MEEP, Nixy is in for the biggest challenge of her bounty-hunting career. Wyn Salvador isn't some lazy kid looking to escape his homework: Wyn does not want to be found. And he's left behind a suicide note. Nixy takes the job but quickly discovers that Wyn's not hiding—he's being held inside the game against his will. But who is holding him captive, and why?

Nixy and Wyn attempt to fight their way out of a mind game unlike any they've encountered, and the battle brings them closer than either could have imagined. But when the whole world is virtual, how can Nixy possibly know if her feelings are real?


Praise For The Leveller…

“First-time YA novelist Durango has a winner here, especially since the technological world building is as engrossing as the novel’s game system. Readers will be pulled in and race to the adventurous finish along with Nixy and friends.”
— Booklist

“An entertaining adventure that is sure to find fans, especially among gamers.”
— School Library Journal

“A spicy romance set in an intriguing virtual world... even non-gamers will likely find plenty to appreciate.”
— Bulletin of the Center for Children’s Books

Julia Durango lives in Ottawa, Illinois, with her two teenage sons. She first fell in love with video games when she bought a Nintendo 64 for her oldest son, Kyle, on the birth of his baby brother, Ryan. Many hours of game play and several game systems later, both boys have long surpassed Julia in video-gaming prowess, though she still clings to a time when Kyle would beg her to beat the bosses for him in The Legend of Zelda: Ocarina of Time and Ryan envied her super-posh village in Animal Crossing.