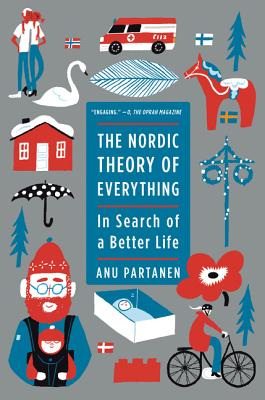 The Nordic Theory of Everything

In Search of a Better Life

“In her careful, evenhanded series of thoughtful essays, Partanen, who just became an American citizen, parses the recipe for Nordic success that even the self-congratulatory ‘exceptional’ American may want to ponder and adapt. . . . An earnest, well-written work worth heeding, especially in our current toxic political climate.” — Kirkus Reviews

A Finnish journalist, now a naturalized American citizen, asks Americans to draw on elements of the Nordic way of life to nurture a fairer, happier, more secure, and less stressful society for themselves and their children.

Moving to America in 2008, Finnish journalist Anu Partanen quickly went from confident, successful professional to wary, self-doubting mess. She found that navigating the basics of everyday life—from buying a cell phone and filing taxes to education and childcare—was much more complicated and stressful than anything she encountered in her homeland. At first, she attributed her crippling anxiety to the difficulty of adapting to a freewheeling new culture. But as she got to know Americans better, she discovered they shared her deep apprehension. To understand why life is so different in the U.S. and Finland, Partanen began to look closely at both.

In The Nordic Theory of Everything, Partanen compares and contrasts life in the United States with life in the Nordic region, focusing on four key relationships—parents and children, men and women, employees and employers, and government and citizens. She debunks criticism that Nordic countries are socialist “nanny states,” revealing instead that it is Americans who are far more enmeshed in unhealthy dependencies than we realize. As Partanen explains step by step, the Nordic approach allows citizens to enjoy more individual freedom and independence than we do.

Partanen wants to open Americans’ eyes to how much better things can be—to show her beloved new country what it can learn from her homeland to reinvigorate and fulfill the promise of the American dream—to provide the opportunity to live a healthy, safe, economically secure, upwardly mobile life for everyone. Offering insights, advice, and solutions, The Nordic Theory of Everything makes a convincing argument that we can rebuild our society, rekindle our optimism, and restore true freedom to our relationships and lives.


Praise For The Nordic Theory of Everything: In Search of a Better Life…

“…meticulously researched. [Partanen] offers a clear, informative, fact-filled survey of the differences between American and Nordic child care, health care, education, eldercare and taxation arrangements. It could be a game-changer in national conversations about the roles that governments should play in their citizens’ lives.” — Seattle Times

“An engaging fusion of reportage and memoir.” — O, the Oprah Magazine

“Partanen’s pride in her homeland and genuine concern for the struggles of middle-class Americans infuse her book with candor and charm, and her perceptions about American struggles feel spot-on.” — Booklist

“This highly readable and entertaining work is timely, as the conversation about inequality and the role of social services in this country has never been more relevant.” — Library Journal

“If Americans really understood how bad we have it-how unjust and wrongheaded our child care, education, and public health policies are-we’d take to the streets. Anu Partanen rips up the stale stereotypes about Nordic welfare states and shows us all the kinds of human flourishing we’re missing out on.This is a dangerous book. Don’t let it fall into the wrong hands.” — Judith Shulevitz, author of The Sabbath World

“In her careful, evenhanded series of thoughtful essays, Partanen, who just became an American citizen, parses the recipe for Nordic success that even the self-congratulatory ‘exceptional’ American may want to ponder and adapt. . . . An earnest, well-written work worth heeding, especially in our current toxic political climate.” — Kirkus Reviews

“This is a wonderful, hopeful book about what American society could be—not by adopting Nordic ‘socialism,’ but by embracing the values that have allowed Nordic citizens to enjoy more freedom and equality than in present-day America. The American Dream was once an inspiration to the world. Anu Partanen shows us how to rediscover it.” — Robert B. Reich, Chancellor's Professor of Public Policy at University of California, Berkeley, and former U.S. Secretary of Labor

“In this election year, Partanen’s sensible book should be required reading for those who wonder why so many Americans feel resentful and alienated.” — Foreign Affairs

Anu Partanen’s work has appeared in the New York Times and the Atlantic. A journalist in Helsinki for many years, she has also worked at Fortune magazine as a visiting reporter through the Innovation Journalism Fellowship at Stanford University. She lives in New York City.
Loading...
or support indie stores by buying on