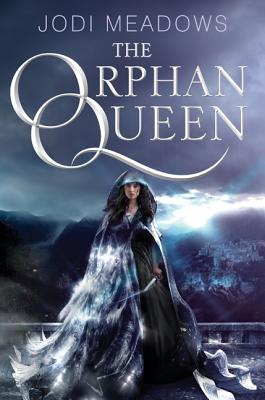 An epic fantasy filled with adventure, intrigue, and romance from the New York Times bestselling coauthor of My Plain Jane, perfect for fans of Graceling by Kristin Cashore, The Girl of Fire and Thorns by Rae Carson, and Shadow and Bone by Leigh Bardugo.

When Princess Wilhelmina was a child, the Indigo Kingdom invaded her homeland. Ten years later, Wil and the other noble children who escaped are ready to fight back and reclaim Wil’s throne. To do so, Wil and her best friend, Melanie, infiltrate the Indigo Kingdom palace with hopes of gathering information that will help them succeed.

But Wil has a secret—one that could change everything. Although magic has been illegal for a century, she knows her ability could help her save her kingdom. But magic creates wraith, and the deadly stuff is moving closer and destroying the land.

And if the vigilante Black Knife catches her using magic, she may disappear like all the others....


Praise For The Orphan Queen…

Hidden identities, allusions to environmental concerns, a clever heroine with a worthy potential love interest, and some monster-mashing fight scenes elevate this romantic series opener. A cliff-hanger ending will have many readers exclaiming aloud their impatience at having to wait for the sequel. — Booklist

Fans of Katniss and the Sisters of St. Mortain from Robin LaFevers’s “His Fair Assassin” series and other strong, vengeful female heroines will root for Wil. — School Library Journal

Meadows deftly juggles a multitude of plot points here, managing to link each element to Wil’s growth as a character. A cliffhanger ending puts a beloved character’s life in peril, ensuring both a sequel and readers’ clamoring for it. — Bulletin of the Center for Children’s Books

One of the most compelling fantasies I’ve ever read. Fans of strong heroines, secret identities, and terrifyingly dangerous magic should put Jodi Meadows at the top of their ‘to read’ lists. — C.J. Redwine, author of the Defiance trilogy

THE ORPHAN QUEEN casts its spell from the first page. Exquisite, captivating and romantic —Jodi Meadows’s world forbids magic, but THE ORPHAN QUEEN is brimming with it. I loved this book! — Danielle Paige, New York Times bestselling author of Dorothy Must Die

Jodi Meadows wants to be a ferret when she grows up and she has no self-control when it comes to yarn, ink, or outer space. Still, she manages to write books. She is the author of the Incarnate trilogy, the Orphan Queen duology, and the Fallen Isles trilogy and coauthor of the New York Times bestsellers My Lady Jane, My Plain Jane, and My Calamity Jane. Visit her at www.jodimeadows.com.