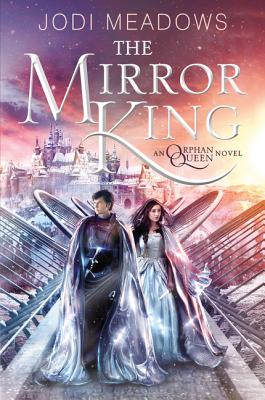 In this stunning conclusion to the Orphan Queen duology, New York Times bestselling coauthor of My Plain Jane Jodi Meadows follows Wilhelmina’s breathtaking and brave journey from orphaned criminal on the streets to magic-wielding queen.

This epic fantasy duology is perfect for fans of Graceling by Kristin Cashore, The Girl of Fire and Thorns by Rae Carson, and Shadow and Bone by Leigh Bardugo.

Princess Wilhelmina is ready for her crown, but declaring herself queen means war. Her magic is uncontrollable and now there’s a living boy made of wraith—destructive and deadly, and willing to do anything for her.

Caught between what she wants and what is right, Wilhelmina realizes the throne might not even matter. Everyone thought the wraith was years off, but already it’s destroying Indigo Kingdom villages. Princess Wilhelmina’s ability might be just the thing to help reclaim her kingdom—or ruin it forever.

PRAISE FOR MIRROR KING: “This story’s the perfect length, and though it’s hard to say goodbye to lovable, flawed, strong Wil, such a well-crafted, enjoyable, and immersive story helps ease the pain.”
— Kirkus Reviews (starred review)

“Tensions-both political and romantic-arise. For those eager to continue the adventure, there are four digital novellas situated in this same world: The Hidden Prince, The Glowing Knight, The Burning Hand, and The Black Knife.”
— Booklist

“This book was just as good as THE ORPHAN QUEEN, if not better. Every part of this book is great. Jodi Meadows knows how to write engrossing fantasy worlds with layered characters and the perfect amount of romantic intrigue. If you haven’t read THE ORPHAN QUEEN, read it now.”
— Amie Mechler-Hickson, Boswell Book Company

PRAISE FOR THE ORPHAN QUEEN: Fans of Katniss and the Sisters of St. Mortain from Robin LaFevers’s “His Fair Assassin” series and other strong, vengeful female heroines will root for Wil.
— School Library Journal

Hidden identities, allusions to environmental concerns, a clever heroine with a worthy potential love interest, and some monster-mashing fight scenes elevate this romantic series opener. A cliff-hanger ending will have many readers exclaiming aloud their impatience at having to wait for the sequel.
— Booklist

One of the most compelling fantasies I’ve ever read. Fans of strong heroines, secret identities, and terrifyingly dangerous magic should put Jodi Meadows at the top of their ‘to read’ lists.
— C.J. Redwine, author of the Defiance trilogy

THE ORPHAN QUEEN casts its spell from the first page. Exquisite, captivating and romantic —Jodi Meadows’s world forbids magic, but THE ORPHAN QUEEN is brimming with it. I loved this book!
— Danielle Paige, New York Times bestselling author of Dorothy Must Die

PRAISE FOR INCARNATE: The romance is captivating, as are the questions raised by the reincarnations. […]This would be a thought-provoking choice for anyone who is looking to move beyond vampires, werewolves, and angels.
— School Library Journal (starred review)

INCARNATE has an eerie and intriguing premise and I am looking forward to seeing where Jodi Meadows takes it next.
— Robin McKinley, bestselling and Newbery Award winning author of The Hero and the Crown, Spindle’s End, Dragonhaven, and Pegasus

Lyrical and thought-provoking, INCARNATE is the kind of book that stays with you long after you’ve turned the last page. I loved it!
— Rachel Hawkins, New York Times Bestselling author of Hex Hall and Demonglass

Jodi Meadows wants to be a ferret when she grows up and she has no self-control when it comes to yarn, ink, or outer space. Still, she manages to write books. She is the author of the Incarnate trilogy, the Orphan Queen duology, and the Fallen Isles trilogy and coauthor of the New York Times bestsellers My Lady Jane, My Plain Jane, and My Calamity Jane. Visit her at www.jodimeadows.com.