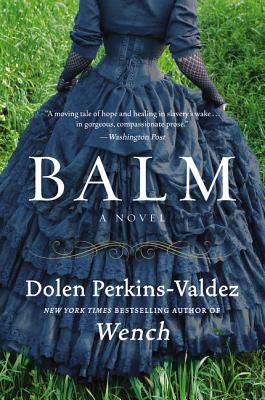 
Praise For Balm: A Novel…

“A powerful novel inspired by our nation’s past…a tale of individual loves, longings, and losses bound together by the healing balm of hope. Perkins-Valdez truly captures the American spirit.”
— New York Journal of Books

“Elegantly crafted …captures the fierce energy, diversity, and suffering of Civil War-era Chicago…Perkins-Valdez moves gracefully among her three protagonists’ viewpoints as they struggle to claim their authentic gifts and free themselves of the pain of their pasts. Her spare, lyrical voice is unsentimental yet compassionate.”
— Publishers Weekly

“From the first page, I fell under the spell of the magical BALM. Powerful characters and exquisite prose bring to life a tumultuous period of American history that still demands our attention…With emotional depth and evocative detail, Dolen Perkins-Valdez has written a beautiful novel I will not soon forget.”
— Tara Conklin, New York Times bestselling author of HOUSE GIRL

“Full of love and loss, meaning and mystery, BALM draws you into a world in tumultuous transition. Hold on tight as Dolen Perkins-Valdez weaves a story you have not heard before; one which you will find impossible to forget. ”
— Pearl Cleage, author of THINGS I SHOULD HAVE TOLD MY DAUGHTER: LIES, LESSONS AND LOVE AFFAIRS

“In BALM, Dolen Perkins-Valdez effectively reveals the emotional injury suffered by everyone following the Civil War. All of the characters came alive and I cared for them deeply. That, to me, is the best kind of book.”
— Kathleen Grissom, author of THE KITCHEN HOUSE

“Dolen Perkins-Valdez is an ambitious writer who looks to the past with a calm gaze and a sympathetic heart. In her new novel BALM, as in her startling debut novel WENCH, the complexity of her characters and visual power of her prose make for riveting reading.”
— Valerie Martin, author of THE GHOST OF THE MARY CELESTE

“Fiercely creative and exquisitely rendered...In sweeping prose, Perkins-Valdez transports you to Chicago after the Civil War, with Madge, a freeborn black woman, Sadie, a young white woman, and Hemp, a freedman looking for his wife. Their journeys of love, loss and reconciliation become your journeys. A must read.”
— Lalita Tademy, New York Times bestselling author of CANE RIVER and RED RIVER