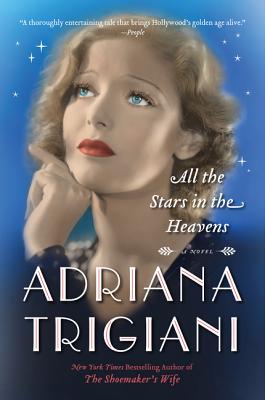 "Trigiani spins a tale of star-crossed lovers... A heartwarming tale of women's lives behind the movies." -Kirkus Reviews

Adriana Trigiani is the New York Times bestselling author of eighteen books in fiction and nonfiction, published in 38 languages, making her one of the most sought after speakers in the world of books today. Adriana is an award-winning playwright, and writer/director in film and television. Adriana co-founded The Origin Project, an in-school writing program which serves over 1,700 students in the Appalachian Mountains of Virginia. Adriana hosts a weekly Facebook Live show, Adriana Ink, every Tuesday evening at 6 PM EST featuring guest authors, giveaways and more. Follow along with Adriana on Facebook and Instagram @AdrianaTrigiani. Adriana lives in New York City with her family.

1. What characteristics make Loretta so successful beyond the typical “life span” of an actress in this age of Hollywood? In what ways is she the “modern woman” that Alda considers her to be?

2. How does the time and place—the Golden Age of Hollywood—affect Loretta’s relationship with Clark Gable? What are the standards that are set and why? What is it in this setting that makes it so compelling? How would the circumstances change if their relationship took place in modern times? Would a story like this be as spellbinding and compelling in Hollywood today?

3. Spencer Tracy and Clark Gable play very different roles in Loretta’s life, despite both being her love interests. How does each of them affect Loretta’s personal growth? To what degree does her relationship with Spencer influence her later relationship with Clark? Loretta says her biggest regret is not marrying Clark Gable. Do you agree or disagree?

4. Though Alda and Loretta come from very different backgrounds, they work well together. How does Alda’s upbringing and history prepare her for a life as Loretta’s secretary? What values do they share? In contrast, how does Loretta’s view on the nature of love differ from Alda’s?

5. Despite their feelings for one another, Loretta and Clark can’t make their relationship work. What stands in their way? What do you think draws Loretta to Clark? Do you think that Clark’s love for Loretta was something more meaningful to him than any of the other romances/marriages he indulged in?

6. In Padua, Loretta experiences the making of grappa with Signore Ducci. He says to her, “Grappa is life. You use everything to make it, all the things that no one wants, that no one can use, we use. Everything in life, whether sweet or bitter, ends up in the glass—a mix of.” How would you apply this metaphor to Loretta’s life, specifically?

7. “Loretta” is a stage name; her given name is Gretchen. Only those closest to her call her by her given name, and as a public figure, she has somewhat of a double persona. How is her true self different from how she is perceived by the masses?

8. Loretta is a devout Catholic. How does her faith inform her major life decisions?

9. Why do you think Alda felt the need to tell Luca about her past, despite Loretta’s advice?

10. Motherhood plays a significant role in this story. How does Loretta’s relationship with Gladys influence her choices as a mother to Judy? Why do you think Alda never adopted children?