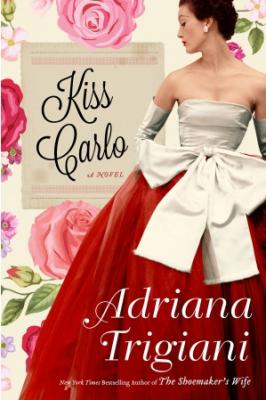 
Praise For Kiss Carlo: A Novel…

Praise for Kiss Carlo: “For Adri-addicts and newcomers alike, Kiss Carlo is a delightfully retro read from novelist Adriana Trigiani, best-selling author of The Shoemaker’s Wife. Carlo is a sprawling story that stretches from Italy to Philadelphia and New York to interweave the lives of hard-working Italian families making a living in the years after World War II. . . . Nicky and Calla’s chemistry is crackling; they don’t talk so much as banter. The path they must travel to each other’s side is winding but rewarding, mostly because of the characters they meet along the way. . . . At a time when crass seems to trump class in popular culture, Kiss Carlo may be just what we need, a warmhearted romp that’s a welcome escape from novels about girls who are gone/on a train/tattooed. Kiss Carlo is set in a world where people don’t eat pasta, they eat macaroni, and the secret isn’t in the sauce but in the gravy. Now that’s Italian—and an incredibly satisfying dish to dig into. Three and a half out of four stars.” — USA Today

Trigiani’s boisterous, maddening, devoted Italian clan will have you wishing they’d adopt you too.” — People

“If you are looking for a page turner this summer, pick up Adriana Trigiani’s Kiss Carlo. . . I look forward to every new book by Adriana Trigiani. She is not only delightful in person, but her books are a joy to read. That includes her latest novel Kiss Carlo, this month’s book buyer pick. . .The sweeping multigenerational story effortlessly transports readers from Italy to the streets of South Philly to New York City, while the characters explore the ties that bind, tradition, wanting more from life, Shakespeare and much more. As they examine what they want for themselves, they also celebrate love, hope and family. . . Best of all? Trigiani tells this story with her trademark wit and joie de vivre.”     — The Costco Connection

“Using motifs and themes from the Bard, Kiss Carlo is an epic novel about family, secrets, and pursuing your dreams.” — Popsugar

“Accompanying Nicky on his journey of self-discovery is worth the trip.” — Richmond Times-Dispatch

“An important story that goes beyond the meaning of family to the deeper question of what it means to have a life well-lived.” — The Mountain Times

“A world of warm, lively characters whose charming idiosyncrasies lead them to collide and ricochet along the way to love.... A delightfully sprawling comedy full of extended families.” — Kirkus Reviews

Praise for Adriana Trigiani: “A comedy writer with a heart of gold” — New York Times

“Seamlessly superb storytelling.... Trigiani never loses hold of the hearts of her characters of the wisdom that tragedy and redemption are also part of life.” — St. Louis Post-Dispatch

1. What’s significant about the particular historic time in which the story is set? What defines the United States and Philadelphia in particular?

2. How are Dom and Mike Palazzini similar or different? What causes such close brothers to place each other “on the island” for so many years? What does Mike mean by his lament that “Dom had not yet learned how to live”?

3. In what ways does the loss of his mother affect Nicky Castone throughout his life? How does his inclusion in the Palazzini family help or challenge him?

4. Do you think you could call Hortense Mooney Nicky’s “third mother”? What wisdom does she possess about the Palazzini family? About life? What particular abilities help her grow and change and become so successful?

5. What might it mean that Nicky “saw beauty in the world even when there wasn’t any”? How does this affect his decisions and behavior?

6. Honesty is the “most important virtue” for Nicky because he believes that “truth made life simple.” In what ways is this true or not? How does he reconcile this with his impersonating Carlo Guardinfante? Where else throughout the story is honesty embraced or avoided?

7. What does Sam Borelli so value about theater that he would dedicate his entire life to serving it? What is the value of a place like the Borelli Theater to a community?

8. As a father, Sam worries about his talented artist daughter. Why? To what extent might the abilities and values of an artist potentially make life more difficult?

9. Beyond simple entertainment, in what various ways can literature be valuable in one’s life? What is it about the plays of Shakespeare in particular that evoke such dedication from everyone at the Borelli Theater?

10. Working at The Borelli, Nicky realizes that “theater was the volatile, dangerous, and restless sea in the world of all art forms.” What might he mean? Why might this have been so compelling to him?

11. What various motivations does Nicky have for impersonating Carlo? What complex effects are achieved by the use of impersonation and mistaken identity in many of Shakespeare’s plays?

12. Eventually, Nicky makes the profound decision to “live a life that mattered.” What might this mean? What does it mean for him to be “the dramatist of his own life”? Why does he come to value risk over security?

13. What is it about Mamie Confalone that heals Nicky? Why, after such a profound experience, don’t they stay together?

14. How does the advent of television change and even threaten the role of the theater? What can theater provide that television cannot?

15. Hortense Mooney realizes that “destiny reveals itself when need and desire merge in the moment.” What might this mean? How does it play out with Nicky, Calla, and others in the story?

16. Why do you think that Dom and Mike finally reconcile after a rift of so many years?

17. What qualities are essential for a strong and successful family that grows and endures for generations?

18. What qualities make Nicky and Calla such a profound and inevitable match? How do they balance or complement each other? Amidst the forces of destiny and luck and hard work, what’s the value of friendship and love?