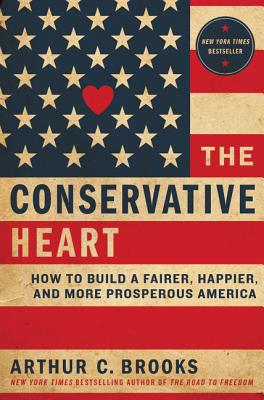 How to Build a Fairer, Happier, and More Prosperous America

The prominent economist and president of the American Enterprise Institute—the leading intellectual think tank on the right—offers a bold new vision for conservatism as a movement for social and economic justice.

In The Conservative Heart, Arthur C. Brooks contends that after years of focusing on economic growth and traditional social values, it is time for a new kind of conservatism—one that helps the vulnerable without mortgaging our children’s future. In Brooks’ daring vision, this conservative movement fights poverty, promotes equal opportunity, celebrates earned success, and values spiritual enlightenment. It is an inclusive movement with a positive agenda to help people lead happier, more hopeful, and more satisfied lives.

One of the country’s leading scholars and policy thinkers, Brooks has considered these issues for decades. Drawing on years of research on the sources of happiness, he asserts that what people most need are four “institutions of meaning”—faith, family, community, and meaningful work. These are not only the foundations of personal wellbeing, but also the necessary means for building a better nation.

Combining reporting, original research, and case studies, and free of vituperative politics, The Conservative Heart is an intelligent and compelling manifesto for renewal. Clear, well-reasoned, and accessible, it is a welcome new strategy for disconsolate conservatives looking for fresh, actionable ideas to address the serious problems confronting us today and to reclaim our future, and for politically independent citizens who believe that neither political party addresses their needs or concerns.


Praise For The Conservative Heart: How to Build a Fairer, Happier, and More Prosperous America…

Arthur C. Brooks is president of the American Enterprise Institute, where he also holds the Beth and Ravenel Curry Chair in Free Enterprise. He is the author of eleven books, including the bestsellers The Conservative Heart and The Road to Freedom. He is an op-ed columnist for The Washington Post, and host of the podcast The Arthur Brooks Show. Previously, he spent twelve years as a professional classical musician in the United States and Spain, including several seasons as a member of the City Orchestra of Barcelona. A native of Seattle, Brooks lives with his family in Bethesda, Maryland. In the fall of 2019, he will join the faculty of the Harvard Kennedy School and Harvard Business School.