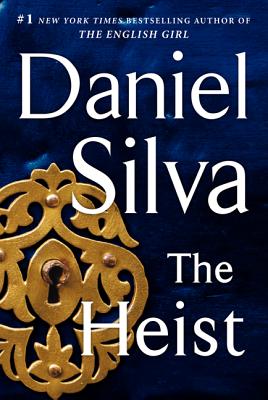 Sometimes the best way to find a stolen masterpiece is to steal another one . . .

Master novelist Daniel Silva has thrilled readers with sixteen thoughtful and gripping spy novels featuring a diverse cast of compelling characters and ingenious plots that have taken them around the globe and back—from the United States to Europe, Russia to the Middle East. His brilliant creation, Gabriel Allon—art restorer, assassin, spy—has joined the pantheon of great fictional secret agents, including George Smiley, Jack Ryan, Jason Bourne, and Simon Templar.

Following the success of his smash hit The English Girl, Daniel Silva returns with another powerhouse of a novel that showcases his outstanding skill and brilliant imagination, and is sure to be a must read for both his multitudes of fans and growing legions of converts.

“The Heist by Silva is nothing short of phenomenal. It is his best work to date. And that is a huge statement since each novel has been unique and marvelous.” — Naples Daily News

“The story is a twisting tale of moves and countermoves, and even if this is your introduction to Gabriel Allon, you’ll find the characters in the book come to life.” — Oklahoma City Oklahoman

“Silva has weaved together a story with intrigue, insight, and suspense.” — Crimespree Magazine

“Magnificent….This book has all the elements you love about Silva’s writing—his way with a plot, his incomparable characters, and the range of emotions he piles into his pages.” — Huffington Post

“Smart, unpredictable, and packed with bits of history, art, heart, and imagination, this is a page turner to be savored….When it comes to the vast club of practitioners of international spycraft, Silva is a cut above them all, and The English Girl is a masterwork.” — Neal Thompson, Amazon.com on The English Girl

“Although Gabriel’s adventures are set in the real world of greedy politicians and grabs for control of a diminishing supply of natural resources, ‘Israel’s avenging angel’ has the superhuman abilities that make for a satisfying fantasy.” — Columbus Dispatch on The English Girl

“Allon is a great political operative, but Silva is an even greater writer. That is what makes THE ENGLISH GIRL a must read.” — Huffington Post on The English Girl

Daniel Silva is the award-winning, #1  New York Times bestselling author of The Unlikely Spy, The Mark of the Assassin, The Marching Season, The Kill Artist, The English Assassin, The Confessor, A Death in Vienna, Prince of Fire, The Messenger, The Secret Servant, Moscow Rules, The Defector, The Rembrandt Affair, Portrait of a Spy, The Fallen Angel, The English Girl, The Heist, The English Spy, The Black Widow, House of Spies, The Other Woman, The New Girl, and The Order.  He is best known for his long-running thriller series starring spy and art restorer Gabriel Allon. Silva’s books are critically acclaimed bestsellers around the world and have been translated into more than 30 languages. He resides in Florida with his wife, television journalist Jamie Gangel, and their twins, Lily and Nicholas. For more information visit www.danielsilvabooks.com