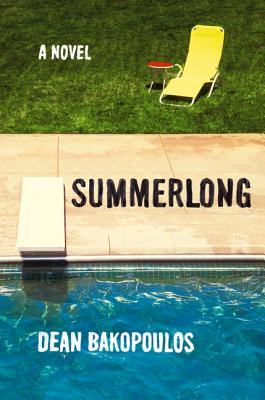 The author of Please Don’t Come Back from the Moon and My American Unhappiness delivers his breakout novel: a deft and hilarious exploration of the simmering tensions beneath the surface of a contented marriage which explode in the bedrooms and backyards of a small town over the course of a long, hot summer.

In the sweltering heat of one summer in a small Midwestern town, Claire and Don Lowry discover that married life isn’t quite as they’d predicted.

One night Don, a father of three, leaves his house for an evening stroll, only to wake up the next morning stoned, and sleeping in a hammock next to a young woman he barely knows. His wife, Claire, leaves the house on this same night to go on a midnight run—only to find herself bumming cigarettes and beer outside the all-night convenience store.

As the summer lingers and the temperature rises, this quotidian town’s adults grow wilder and more reckless while their children grow increasingly confused. Claire, Don, and their neighbors and friends find themselves on an existential odyssey, exploring the most puzzling quandaries of marriage and maturity. When does a fantasy become infidelity? When does compromise become resentment? When does routine become boring monotony? Can Claire and Don survive everything that befalls them in this one summer, forgive their mistakes, and begin again?

Award-winning writer Dean Bakopoulos delivers a brutally honest and incredibly funny novel about the strange and tenuous ties that bind us, and the strange and unlikely places we find connection. Full of mirth, melancholy, and redemption, Summerlong explores what happens when life goes awry.


Praise For Summerlong: A Novel…

Dean Bakopoulos is a great talent--everything he writes is full of insight and inspiration and the best kind of divine comedy.
— Lorrie Moore

Summerlong is Dean Bakopoulos at his finest: daringly funny, heartbreakingly sad, and forever on the watch for redemption. This is a book for any season, any reader, anywhere--it shimmers with magic, lust, and love.
— Nickolas Butler, author of Shotgun Lovesongs

There is no better guide through a hot summer in the heartland than Dean Bakopoulos...Lovers chasing all over the joint, the glorious wreckage, and Bakopoulos with his keen eye, his sympathy and his wit, there to see all.
— Jane Hamilton

“Tennessee Williams has nothing on Bakopoulos when it comes to marital and moral dissipation… Into this emotional abyss Bakopoulos injects a high degree of coy humor and wry self-deprecation to deliver a heartbreaking and wise … A sure hit with fans of the three Jonathans: Dee, Franzen, and Tropper.”
— Booklist (starred review)

“Provocative, sultry… the novel stays light on its feet; its breezy chapters are laced with sex and humor… between the louche vibe and matriarchal presence, the novel often feels like Armistead Maupin’s San Francisco teleported to the Midwest.”
— Kirkus Reviews

“Bakopoulos is very much his own writer, and it is his distinct humanity and sense of humor that make this story so emotionally rewarding. This is that rare, contemporary suburban novel with characters the reader can actually embrace in spite of their many flaws.”
— Publishers Weekly

“A couple in a crumbling marriage find themselves entwined with two lost 20-somethings during a hot, sticky Iowan summer... Dean Bakopoulos, who lives in Iowa himself, crafts a surprisingly steamy Midwestern landscape and a set of characters who will do anything to stay afloat as their lives fall apart.”
— Esquire

“Summer gets weird in a Midwestern town when married couples start behaving recklessly-as if, my God, they’re not married at all! Bakopoulos... uses the adults’ bizarre behavior to examine ideas about marriage, happiness and that oh-so-slim line between fantasy and infidelity.”
— Miami Herald

“A dishy warm-weather read... Bakopoulos draws readers into the intimate life of married couple Claire and Don Lowry as they wrestle with parenting, failed ambitions and the search for middle-aged happiness. There’s sex, drugs and more sex in this steamy summer tale, with an intensely emotional undercurrent.”
— Wisconsin State Journal

“Attention vacationers: Award-winning author Dean Bakopoulos... has served up a sultry story that fits perfectly in your carry-on…[but] This isn’t just a story of people enjoying a free-love bacchanal; Summerlong also explores the consequences and heartbreak of testing the limits of relationships.”
— BookPage

“Summerlong is both smart and satisfying.”
— Metro US

” ‘Compared to the moody and fierce North Atlantic, the vista of the icy blue lake seems to make your heart swell rather than tremble,’ thinks ABC when she sees it. The novel’s ending, sort of surprisingly, provokes the same reaction.”
— Newsday

“All the threads Bakopoulos has been expertly weaving suddenly begin to connect, and suddenly everything fits in a way that is as dazzling as the firefires that dot the shore, bringing a sense of absolute wonder and even a kind of hope.”
— San Francisco Chronicle

“Beyond the muggy weather, Bakopoulos, writer-in-residence at Grinnell College, conjures the milky mood of ‘A Midsummer Night’s Dream,’ with pot and booze substituting for fairy dust and lovers entwined with the wrong person... Lord, what fools these mortals be! And what fun to see them in action.”
— Seattle Times

“A sharply observed and smartly written book... captures the that instant of perfect equilibrium, where everything is exactly right - when love and family and career have come into exquisite balance. And then the instant after when everything you thought you’ve built just falls to pieces.”
— NPR, Best Books of 2015

“With great heart and humor, Bakopoulos drops us into the town of Grinnell, Iowa, during a single summer heat wave of lust, longing and the vagaries of love.”
— San Francisco Chronicle, 100 Best Books of 2015

Dean Bakopoulos is the author of the New York Times Notable Book Please Don't Come Back from the Moon and My American Unhappiness. He holds an MFA from the University of Wisconsin-Madison, and is the winner of a Guggenheim fellowship and a National Endowment for the Arts fellowship. He is the writer-in-residence at Grinnell College, and lives in Iowa.