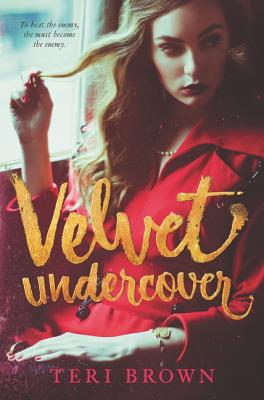 Perfect for fans of Jennifer Donnelly and Libba Bray comes this page-turning historical spy thriller from Teri Brown, author of the Born of Illusion series.

Samantha Donaldson's family has always done its duty for the British Crown. In the midst of World War I, seventeen-year-old Sam follows in their footsteps, serving her country from the homefront as a messenger for the intelligence organization MI5. After her father disappears on a diplomatic mission, she continues their studies of languages, mathematics, and complex puzzles, hoping to make him proud.

When Sam is asked to join the famed women's spy group La Dame Blanche, she's torn—while this could be an unbelievable adventure, how can she abandon her mother, who has already lost a husband? But when her handlers reveal shocking news, Sam realizes she can't refuse the exciting and dangerous opportunity.

Her acceptance leads her straight into the heart of enemy territory on a mission to extract the most valuable British spy embedded in Germany, known only as Velvet. Deep undercover in the court of Kaiser Wilhelm II, Sam must navigate the labyrinthine palace and its many glamorous—and secretive—residents to complete her assignment. To make matters worse she must fight a forbidden attraction to the enemy—a dangerously handsome German guard. In a place where personal politics are treacherously entangled in wartime policy, can Sam find Velvet before it's too late . . . for them both?

A thrilling story of one girl's journey into a deadly world of spy craft and betrayal—with unforgettable consequences.

“A slow-burning tale of espionage and deceit that explores the complexities and moral uncertainties of war.” — Kirkus Reviews

“A fast-paced thriller with a smart, savvy heroine at its heart.” — Booklist

“[An edgy, taut thriller.” — Bulletin of the Center for Children’s Books

Praise for BORN OF ILLUSION: “Characterization is a strength in this first-person narrative, in which the setting, New York City in the 1920s, is so richly drawn as to become a character in itself …. Will appeal to fans of Libba Bray.” — Kirkus Reviews

Praise for BORN OF ILLUSION: “Anna’s strong personality and her complex relationship with her mother (who mixes love with professional jealousy), as well as a slightly supernatural romance, provide lots of teen appeal. ” — The Horn Book

Praise for BORN OF ILLUSION: “Teri Brown creates a world of magic and deception, romance and intrigue. This book sparkles with dark arts.” — Melissa Walker, author of UNBREAK MY HEART and SMALL TOWN SINNERS

Praise for BORN OF ILLUSION: “I suppose I could wax on about this book’s strengths-its magic, romance and exquisite historical detail-but the bottom line is: Teri Brown’s BORN OF ILLUSION is the most thoroughly enjoyable novel I’ve read all year.” — Lauren Baratz-Logsted, author of THE TWIN'S DAUGHTER