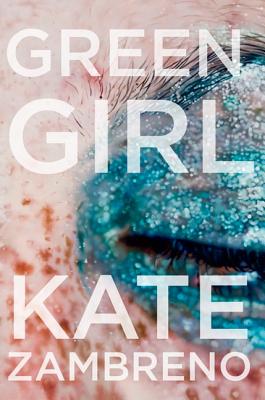 With the fierce emotional and intellectual power of such classics as Jean Rhys's Good Morning, Midnight, Sylvia Plath's The Bell Jar, and Clarice Lispector's The Hour of the Star, Kate Zambreno's novel Green Girl is a provocative, sharply etched portrait of a young woman navigating the spectrum between anomie and epiphany.

First published in 2011 in a small press edition, Green Girl was named one of the best books of the year by critics including Dennis Cooper and Roxane Gay. In Bookforum, James Greer called it "ambitious in a way few works of fiction are." This summer it is being republished in an all-new Harper Perennial trade paperback, significantly revised by the author, and including an extensive P.S. section including never before published outtakes, an interview with the author, and a new essay by Zambreno.

Zambreno's heroine, Ruth, is a young American in London, kin to Jean Seberg gamines and contemporary celebutantes, by day spritzing perfume at the department store she calls Horrids, by night trying desperately to navigate a world colored by the unwanted gaze of others and the uncertainty of her own self-regard. Ruth, the green girl, joins the canon of young people existing in that important, frightening, and exhilarating period of drift and anxiety between youth and adulthood, and her story is told through the eyes of one of the most surprising and unforgettable narrators in recent fiction—a voice at once distanced and maternal, indulgent yet blackly funny. And the result is a piercing yet humane meditation on alienation, consumerism, the city, self-awareness, and desire, by a novelist who has been compared with Jean Rhys, Virginia Woolf, and Elfriede Jelinek.


Praise For Green Girl: A Novel…

“A major step forward for a talented and whip-smart writer.”
— James Greer, BookForum

“I can’t recall the last time I read a book whose heroine infuriated and seduced me as completely as Kate Zambreno’s Green Girl.”
— Elissa Schappell, Vanity Fair

“If you were ever a green girl, you will recognize yourself on page after page.”
— Lightsey Darst, Bookslut

“It cracks, it zings. It makes you call your girlfriend and read sections aloud over the phone.”
— Kirkus Reviews

“The best word to describe Kate Zambreno’s Green Girl is searing. . . A novel about a young woman who is learning how to perform her femininity, who is learning the power of it, the fragility of it.”
— Roxane Gay, Bookslut

“Brilliant. . . This is a book I could see savored by both a teen finding great solace in, and by someone like myself, who probably could not be more removed from the lifestyle of its matter.”
— Blake Butler, HTMLGiant

“Kate Zambreno writes with the clear eyes and steady hand of a vérité filmmaker.”
— Pamela Lu

“Not since Faulkner first arrested my heart and stole my breath in The Sound and the Fury have I been as ravaged by the language of a novel as in Kate Zambreno’s Green Girl.”
— Lidia Yuknavitch

“An ambitious synthesis of millennial identity crisis, lyrical experimentation and emotional self-destruction. . . . Zambreno has the writing chops for this unconventional journey.”
— Kirkus Reviews

“…a fresh and important new voice in literature… Ambitious but difficult to pin down, smart, stylish, and filled with supercharged prose that pulsed with the searing intensity few writers could maintain throughout an entire book...”
— Flavorwire

“A deeply character-driven book, Green Girl allows its narrator to insert herself with pity, scorn or deliberate self-recognition, as though a god watching her creating crawl fitfully through the city streets...
— Shelf Awareness

“Zambreno’s novel unfolds with a filmic quality, of scenes playing out with lyric intensity.”
— The Millions

“This is Zambreno in high form, unrelenting in her emotional sincerity and intellectual acuity, a necessary voice in a still green world.”
— Berfrois

“The young woman’s existential novel for the new millennium. The book is smart, experimental, and just a little bit dangerous . . . It’s a must-read for anyone who’s ever wanted a 21st century update to the Bell Jar. . . Reading it will resonate.”
— Bustle

Kate Zambreno is also the author of two novels and three books of nonfiction. She lives in New York and teaches writing at Columbia University and Sarah Lawrence College.