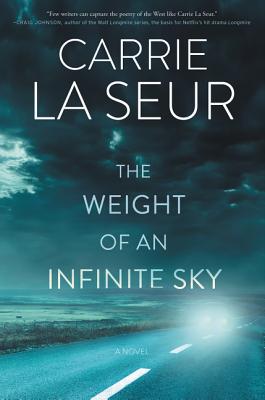 The Weight of an Infinite Sky

The critically acclaimed author of The Home Place explores the heart and mystery of Big Sky Country in this evocative and atmospheric novel of family, home, love, and responsibility inspired by William Shakespeare’s Hamlet.

The only son of a cattle rancher, Anthony Fry chafed against the expectation that he would take over the business that had belonged to his family for generations. While his ancestors planted deep roots in the unforgiving Montana soil, Anthony wanted nothing more than to leave Billings for the excitement, sophistication, and culture of city life. After college he fled to New York, hoping to turn his lifelong love of the theater into a career.

But New York wasn’t the dream Anthony thought it would be. Now, with the unexpected death of his father, Anthony suddenly finds himself back in the place he swore he’d left behind. While the years have transformed the artistic dreamer, they’ve also changed Billings. His uncle Neal, always the black sheep of the Fry family, has become alarmingly close with Anthony’s mother, and a predatory mining company covets the Fry land.

Anthony has always wanted out of Montana, away from his father’s suffocating expectations. Yet now that he may be freed from the burden of family legacy, he’s forced to ask himself what he truly finds important . . . answers that will ultimately decide his fate.

In this unforgettable novel, Carrie La Seur once again captures the breathtaking beauty of the West and its people as she explores the power of family and the meaning of legacy—the burdens we inherit and those we place upon ourselves.


Praise For The Weight of an Infinite Sky: A Novel…

“Carrie La Seur...dazzles with a dramatic story of a land threatened, a prodigal son returned, and a community divided. A modern Western draped over the bones of a Shakespearean tragedy, La Seur weaves an intimate and achingly beautiful tale of broken promises, legacy, belonging, and the shape of home.”
— Valerie Geary, author of Everything We Lost

“La Seur sets her exploration of the Shakespearean themes of abandonment and betrayal, remorse and regret, atonement and redemption against the stunning backdrop of Big Sky country and offers an intimate approach to epic emotions.”
— Booklist

“La Seur’s second novel is as beautifully written as her first, telling another gripping and deeply moving tale that is rich in characterization, detail and true emotion. The Weight of an Infinite Sky is a beautiful tale and the perfect winter read!”
— RT Book Reviews (4 stars)

“This novel captures the real and complex topics of our times: land-use issues, family dynamics, alcoholism, art, and the beauty and sorrows of small-town life. But it’s not a book “only” about the West--it’s a book about humanity and how messy (and lovely) we can be.”
— Laura Pritchett, author of The Blue Hour

“Few writers can capture the poetry of the West like Carrie La Seur and with a nod to Shakespeare she probes the west using its most mercurial element--the interior topography of its people. The Weight of an Infinite Sky is bound to be an instant western classic.”
— Craig Johnson, author of the Walt Longmire series, the basis for Netflix’s hit drama Longmire

“Carrie La Seur…weaves an elegant thread of Shakespeare and poetry throughout her sophomore novel, The Weight of an Infinite Sky. [It’s] is a leisurely Western, full of nuanced characters.”
— Lisa Ko, author of The Leavers

Carrie practices energy and environmental law on behalf of farmers, ranchers, and Native Americans, and does a little writing, from an office in Billings, Montana. Her ancestors homesteaded in Montana in 1864 and survived every sort of calamity and absurdity, so the publishing industry seems pretty tame to her by comparison.

Carrie’s improbable but apparently nonfiction résumé includes a degree in English and French from Bryn Mawr College, a Rhodes Scholarship, a doctorate in modern languages from Oxford University, and a Yale law degree. She has always been a writer. “The writing comes easily,” she says. “It’s what I’m always doing in the background, whatever else is going on. It’s like my resting pulse rate to be scribbling what’s happening in my head. If I didn’t, I’d be wandering the streets talking to myself. Sometimes I do that anyway.”

In 2006, Carrie founded the legal nonprofit Plains Justice, which provides public interest energy and environmental legal services in the northern plains states. Carrie and Plains Justice have played a key role in halting several new coal plants, enacting clean energy reforms, and launching the Keystone XL pipeline campaign. “I’m still involved in Plains Justice, but I went back to private practice in 2012. Running a nonprofit takes a unique blend of selflessness and enough raging narcissism to think you really can change the world. The burnout rate is similar to that of telemarketers.”

A licensed private pilot and committed introvert, Carrie hikes, skis, and fishes the Montana wilderness with her family in her spare time. Her work has appeared in such diverse media as Grist, Harvard Law and Policy Review, The Huffington Post, Mother Jones, and Salon.