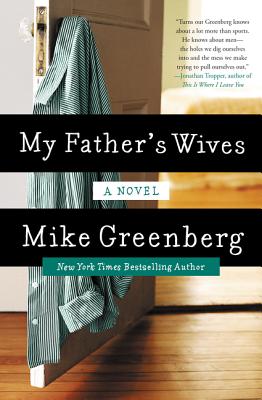 The co-host of ESPN’s Mike and Mike follows up his New York Times bestseller All You Could Ask For with this poignant story of one man’s search to understand himself, his marriage, and his father.

Jonathan Sweetwater has been blessed with money, a fulfilling career, great kids and Claire, his smart, gorgeous, sophisticated wife. But there is one thing Jonathan never had: a relationship with his father.

Percival Sweetwater III has been absent from his son’s life since Jonathan was nine years old. A five-term U.S. senator, now dead, Percy was beloved by presidents, his constituents, and women alike, especially the five women who married him after Jonathan’s mother.

Jonathan hasn’t thought about Percy or the hole he left in his life for years. Dedicated to Claire and his family, he’s nothing like his serial monogamist father. But then Jonathan discovers evidence that everything in his marriage may not be as perfect as he thought. Hurt and uncertain what to do, he knows that the only way to move forward is to go back.

On this quest for understanding—about himself, about manhood, about marriage—Jonathan decides to track down his father’s five ex-wives. His journey will take him from cosmopolitan cities to the mile-high mountains to a tropical island—and ultimately back to confront the one thing Jonathan has that his father never did: home.


Praise For My Father's Wives: A Novel…

“Turns out Greenberg knows a lot more than sports. He knows about men--the holes we dig ourselves into and the mess we make trying to pull ourselves out.”
— Jonathan Tropper, author of This Is Where I Leave You

On the surface, MY FATHER’S WIVES appears to be an examination of relationships. Fathers and sons. Husbands and wives. It is that for sure. But it’s also so much more...Fully realized characters, deft pacing and spot-on dialogue.”
— Lisa Ko, author of The Leavers

“My Father’s Wives is a remarkably compelling story--thought-provoking, sincere, and, at tis heart, undeniably romantic.”
— Meg Donohue, author of All the Summer Girls

Mike Greenberg is the cohost of ESPN's Mike and Mike, the highest-rated sports talk program in the United States, and the author of the New York Times bestselling books All You Could Ask For, Why My Wife Thinks I'm an Idiot, and Mike and Mike's Rules for Sports and Life. He is a graduate of the Medill School of Journalism at Northwestern University and a native of New York City. He currently lives in Connecticut with his wife and two children.