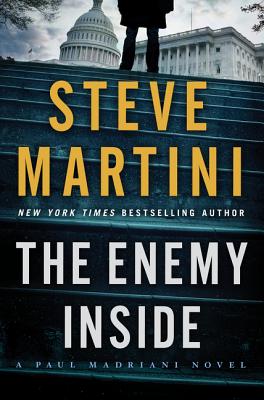 Defending an innocent young man, defense attorney Paul Madriani uncovers a morass of corruption and greed that leads to the highest levels of political power in this electrifying tale of suspense from New York Times bestselling author Steve Martini.

One of the most successful lawyers in the country, Olinda Serna is a master at managing money as well as her influential clients. After years of fierce combat in the political trenches, Serna knows all the dirty secrets, where the bodies are buried, and how deeply they are stacked. When she’s killed in a roadside crash in the high desert of Southern California, powerful heads in Washington begin to panic, worried that their secrets may not be safe anymore.

Alex Ives, a friend of Paul Madriani’s daughter, is accused of vehicular manslaughter in Serna’s death. Ives claims he had only one drink on the night of the accident, yet he can’t remember anything between the time he left for a party north of San Diego and the moment he woke up in a hospital the next morning. He’s still dazed and a little bruised, but also obviously very afraid. After all, a woman is dead, and he’s sure he didn’t kill her.

To save an innocent young man’s life, the brilliant defense attorney must uncover everything he can about Serna and her clients—no matter how unsavory—a search that will lead him into a vortex of corruption, and at its center, a devious killer poised to strike again.


Praise For The Enemy Inside: A Paul Madriani Novel…

“Martini expertly pulls all the threads together as Madriani navigates an assortment of physical and professional challenges.” — Publishers Weekly

“You like Law & Order? Or, even a John Grisham novel? Well, Steve Martini is one of the best of the best when it comes to crime thrillers.” — Asbury Park Press

“Martini’s proven formula for best-seller success combines the appeal of the legal thriller (Martini is a former prosecutor) with the high-concept adventure of, say, Vince Flynn and James Rollins.” — Booklist

“One of the most charismatic defense attorneys in thriller fiction. Madriani is a guy who won’t quit. . . . Best of all, he’s got the heart of a lion: protective, humane, courageous-that makes him such great fun to watch.” — Linda Fairstein

“Steve Martini writes first-rate legal thrillers. His plotting is expert, his characters vivid and alive. His courtroom scenes are rich and credible, and so are his villains. . . . Paul Madriani makes a likable and convincing David among the goliaths of crime, corporations and government.” — Lisa Ko, author of The Leavers