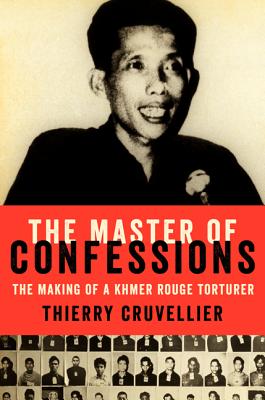 The Master of Confessions

The Making of a Khmer Rouge Torturer

Renowned journalist Thierry Cruvellier takes us into the dark heart of Cambodia's Khmer Rouge with The Master of Confessions, a suspenseful account of a Chief Interrogator's trial for war crimes.

On April 17, 1975, the communist Khmer Rouge, led by its secretive prime minister Pol Pot, took over Cambodia. Renaming the country Democratic Kampuchea, they cut the nation off from the world and began systematically killing and starving two million of their people.

Thirty years after their fall, a man named Duch (pronounced "Doïk"), who had served as Chief Prison officer of S21, the regime's central prison complex, stood trial for war crimes and crimes against humanity. Unlike any other tribunal defendant, Duch acknowledged his personal responsibility, pleaded guilty, and asked for forgiveness from his victims. In The Master of Confessions, Thierry Cruvellier uses the trial to tell the horrifying story of this terrible chapter in history.

Cruvellier offers a psychologically penetrating, devastating look at the victims, the torturers, and the regime itself, searching to answer crucial questions about culpability. Self-drawing on his knowledge, and experience, Cruvellier delivers a startling work of journalistic history—by turns deeply moving, horrifying, and darkly funny.


Praise For The Master of Confessions: The Making of a Khmer Rouge Torturer…

“[An] exceptionally fine portrait of the man and his judgment. . . . [Cruvellier] is an elegant, understated writer, with a keen and rigorous intellect, and a wry, quiet wit.” — Philip Gourevitch, author of We Wish to Inform You That Tomorrow We Will be Killed With Our Families, The New Yorker

“A brilliant study in the mind of a zealous servant to a maniacal ideology.” — George Packer in The New Yorker

“Cruvellier, who has reported on some of the world’s most notorious war crimes, recounts the trial of Duch, the director of the Khmer Rouge’s S-21 prison, where thousands of people were killed. His exhaustive account includes a sly commentary on the whims and limits of the international justice system.” — New York Times Paperback Row

“[The Master of Confessions is] a sobering story of a horrifying episode in recent history, rich in detail and thoroughly-researched. ... an unforgettable, overwhelming, exploration of a tragic period which shouldn’t be forgotten or overlooked.” — Publishers Weekly

“[A] fascinating glimpse into history and the international tribunal system. . . . For a history buff this is a must read, for the average individual it is interesting, and for the person willing to do some soul searching the experience of this book can be profound.” — Portland Book Review

“An exceptional, infinitely troubling work, nothing escapes Thierry Cruvellier’s attention - neither the public’s reactions, nor the court’s idiosyncrasies, the clashes between foreign and Cambodian lawyers, or each side’s motivations and weaknesses.” — Le Point

“A gripping eye-witness account. Thierry Cruvellier’s book is wonderful. Against the backdrop of modern Cambodia, The Master of Confessions recounts the striking story of Duch’s trial, giving voice to both the victims’ horrifying stories and the torturer’s no less unbearable explanation.” — Télérama

“A solemn and rigorous fresco, which will open the eyes of any honest man moved by genocide.” — Le Monde Diplomatique

“A meticulous observer of this unique trial, Cruvellier’s eye is both clinical and critical… A vivid picture of Cambodia caught in systemic slaughter by the Khmers Rouges.” — Libération

“You have to be talented, precise and infinitely patient to tell the story of a distant international trial - Thierry pulls off this feat masterly… It’s the torturer’s own account that draws us into this book - The Master of Confessions is fascinating.” — Le Temps

“An unforgettable book. An impressive, thorough, and well-written depiction of the trial and its audience from the perspective of an outside observer, who through the cathartic experience of watching the trial reveals that ‘torturers’ are not so different from ourselves.” — La Croix

“Thierry Cruvellier’s The Master of Confessions is a book everyone should throw themselves into. The great reporter delivers a striking account of this lengthy trial. With rare talent, he manages to sketch out the dozen or so protagonists in this tragic show. ” — Lire

“An exceptional narrative, which makes this book so much more than just an eyewitness account.” — France Info

“Analytical, thorough and astute, Cruvellier ... steps back and lets his reporting do the talking. … A work of exceptional quality.” — Le Monde

“... Thierry Cruvellier has an unrivalled knowledge of international tribunals. [... Cruvellier] put[s] us in the position of impartial, intelligent spectators, by looking upon these trials in a way that is both distanced and engaged.” — France Culture

“A brilliant blend of journalism and deeper reflection, Cruvellier’s work - a literary accomplishment - maintains a surprising balance between distance and proximity, objectivity and compassion, fact and experience.” — La Quinzaine Littéraire

“...With his supple intelligence and bitingly funny understanding, [Cruvellier] shares and decodes the complexities of the trial and its characters. He pinpoints the crucial moments for those who wish to better understand the way that trials of crimes against humanity work.” — Libération (cambodge.blogs.liberation.fr)

Thierry Cruvellier is the only journalist to have attended trials brought before all contemporary international tribunals for war crimes and crimes against humanity. Since 2003, he has been a consultant with the International Center for Transitional Justice. Cruvellier was also a Nieman Fellow at Harvard University and holds a master's in journalism from Sorbonne University in Paris. He is the author of Court of Remorse: Inside the International Criminal Tribunal for Rwanda.