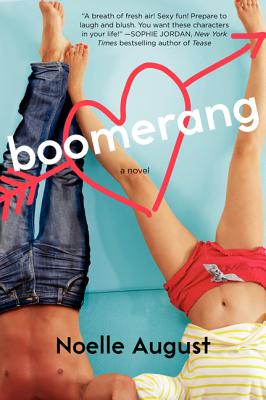 The first book in a sensational New Adult trilogy from Noelle August.

Welcome to Boomerang.com, the dating site for the millennial gen with its no-fuss, no-commitments matchups, and where work is steamier than any random hook-up.

Mia Galliano is an aspiring filmmaker. Ethan Vance has just played his last game as a collegiate soccer star. They’re sharp, hungry for success, and they share a secret.

Last night, Ethan and Mia met at a bar, and, well . . . one thing led to another, which led to them waking up the next morning—together. Things turned awkward in a hurry when they found themselves sharing a post hookup taxi . . . to the same place: Boomerang headquarters.

What began as a powerful connection between them is treated to a cold shower courtesy of two major complications. First, Boomerang has a strict policy against co-worker dating. And second, they’re now competitors for only one job at the end of summer.

As their internships come to an end, will they manage to keep their eyes on the future and their hands off each other, or will the pull of attraction put them right back where they started?


Praise For Boomerang: A Boomerang Novel…

“This debut entry for August in the new adult genre is refreshingly charming. Absent are the tortured baggage tropes that permeate the category, which is a welcome change. Readers who enjoyed Megan McCafferty’s “Jessica Darling” series (especially the later ones set in college) will want to read this.”
— Library Journal

“your summer fling in paperback…”
— WomensHealthMag.com