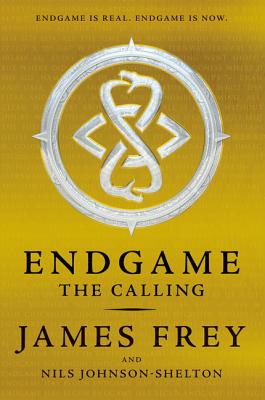 In each generation, for thousands of years, twelve Players have been ready. But they never thought Endgame would happen. Until now.

Omaha, Nebraska. Sarah Alopay stands at her graduation ceremony—class valedictorian, star athlete, a full life on the horizon. But when a meteor strikes the school, she survives. Because she is the Cahokian Player. Endgame has begun.

Juliaca, Peru. At the same moment, thousands of miles away, another meteor strikes. But Jago Tlaloc is safe. He has a secret, and his secret makes him brave. Strong. Certain. He is the Olmec Player. He's ready. Ready for Endgame.

Across the globe, twelve meteors slam into Earth. Cities burn. But Sarah and Jago and the ten others Players know the truth. The meteors carry a message. The Players have been summoned to The Calling. And now they must fight one another in order to survive. All but one will fail. But that one will save the world. This is Endgame.


Praise For Endgame: The Calling…

“The treasure hunters of the world may want to dust off their tools.” — USA Today

“This book is fantastic. On every level. Please just go read it and try and disagree with me. I dare you.” — The Guardian

“A unique dystopian adventure with anchors to the real world… set to become a cultural phenomenon.” — ALA Booklist

“Endgame is like The Hunger Games on steroids.” — Voice of Youth Advocates (VOYA)

“You officially have my attention, James Frey. And to anyone reading this, the challenge is on.” — Bustle.com

“The premise is engaging, in a Hunger Games-meets-National Treasure sort of way, and the diverse global cast is welcome.” — Publishers Weekly

James Frey is originally from Cleveland. All four of his books, A Million Little Pieces, My Friend Leonard, Bright Shiny Morning, and The Final Testament of the Holy Bible, were international bestsellers.