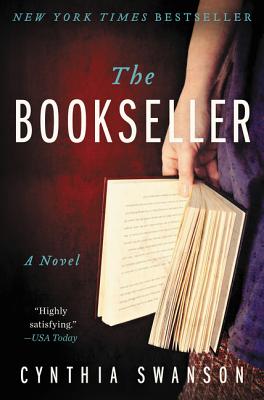 “Cynthia Swanson’s novel will make you think about the paths you could have taken—but even more so, what you can learn from them to make your reality richer.”
— Redbook Magazine

“What if? These words tantalize and haunt us. In The Bookseller, writing with a sharp-tinged empathic pen, Cynthia Swanson takes us on a startling journey where a woman is thrust into the alternative world that might have been, had she made different choices.”
— Randy Susan Meyers, author of Accidents of Marriage

“Cynthia Swanson’s The Bookseller is both a delightful and haunting exploration of identity, love and loss. With great style and compassion, the author asks the age-old question: ‘What if my life were different?’ The answers in this affecting debut novel are truly surprising.”
— Joanna Hershon, author of A Dual Inheritance

“I inhaled The Bookseller. I loved both of Kitty’s worlds, and refused to put the book down until I saw how the tension between the two worlds resolved. A deeply satisfying read.”
— Ann Napolitano, author of A Good Hard Look

“Swanson masterfully crafts both Kitty’s and Katharyn’s worlds, leaving open the question of which of them is real until the final pages. Swanson’s evocative novel freshly considers the timeless question, ‘What if?’ ”
— Publishers Weekly

“This is a stunner of a debut novel, astonishingly tight and fast paced. The 1960s tone is elegant and even, and Kitty/Katharyn’s journey is intriguing…. This will especially resonate with fans of the movie Sliding Doors and the authors Anna Quindlen and Anita Shreve.”
— Library Journal (starred review)

“Swanson’s debut novel is slightly mysterious and thoroughly engrossing, one of those books that will stay with the reader long after it is complete.”
— Romantic Times

“This is the story of a woman coming to terms with who she is; both woman and novel are beautiful.”
— Shelf Awareness

“. . . An accomplished first novel. It is interesting, intriguing, and ultimately satisfying.”
— New York Journal of Books