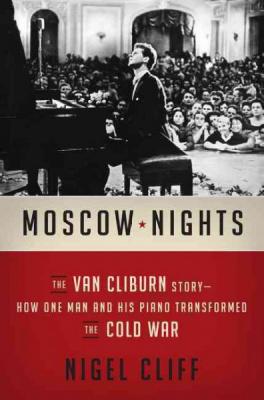 Gripping narrative nonfiction that tells the dramatic story of a remarkable young Texan pianist, Van Cliburn, who played his way through the wall of fear built by the Cold War, won the hearts of the American and Russian people, and eased tensions between two superpowers on the brink of nuclear war.

In 1958, an unheralded twenty-three-year-old piano prodigy from Texas named Van Cliburn traveled to Moscow to compete in the First International Tchaikovsky Competition. The Soviets had no intention of bestowing their coveted prize on an unknown American; a Russian pianist had already been chosen to win. Yet when the gangly Texan with the shy grin took the stage and began to play, he instantly captivated an entire nation.

The Soviet people were charmed by Van Cliburn’s extraordinary talent, passion, and fresh-faced innocence, but it was his palpable love for the music that earned their devotion; for many, he played more like a Russian than their own musicians. As enraptured crowds mobbed Cliburn’s performances, pressure mounted to award him the competition prize. "Is he the best?" Soviet Premier Nikita Khrushchev demanded of the judges. "In that case . . . give him the prize!"

Adored by millions in the USSR, Cliburn returned to a thunderous hero’s welcome in the USA and became, for a time, an ambassador of hope for two dangerously hostile superpowers. In this thrilling, impeccably researched account, Nigel Cliff recreates the drama and tension of the Cold War era, and brings into focus the gifted musician and deeply compelling figure whose music would temporarily bridge the divide between two dangerously hostile powers.


Praise For Moscow Nights: The Van Cliburn Story-How One Man and His Piano Transformed the Cold War…

“Nigel Cliff… has written a freshly sourced account of these momentous Moscow nights. He places them aptly at the heart of the nuclear conflict and poignantly in the personal odyssey of a lanky, gay pianist from a small prairie town who never wanted to do much except play Russian music.”
— Economist

“An elegant, insightful and ultimately definitive account of one of the 20th century’s most compelling events, and the extraordinary artist and person at the heart of it.”
— Houston Chronicle

“Brings to life Van Cliburn’s unexpected triumph and its continuing implications for Soviet-American relations through the end of the Cold War… an engaging account of an extraordinary historical moment.”
— Shelf Awareness

“Cliburn in Russia offers a fascinating perspective on a decade of nuclear tests, espionage schemes and efforts to close the missile gap. This story is to the Cold War what ping-pong diplomacy was to President Nixon’s opening to China. It is both entertaining and illuminating, and Cliff tells it beautifully.”
— Wall Street Journal

“The newest biography on the life of Van Cliburn is a masterpiece …As an account of the political climate and cultural events that the genius musician found himself in as a young man, MOSCOW NIGHTS may long stand as an enthralling resource for historians, audiophiles, and the general public alike.”
— Fort Worth Weekly

“An elegant, insightful and ultimately definitive account of one of the 20th century’s most compelling events, and the extraordinary artist and person at the heart of it.”
— Fort Worth Star-Telegram; Houston Chronicle

“Nigel Cliff… has written a freshly sourced account of these momentous Moscow nights. He places them aptly at the heart of the nuclear conflict and poignantly in the personal odyssey of a lanky, gay pianist from a small prairie town who never wanted to do much except play Russian music.”
— The Economist

“Cliff’s authentic depiction of life during the cold war transports us into a sinister bygone age, while insightful descriptions provide a rare glimpse of [Cliburn’s] sometimes fragile mindset…Cliff’s vivid retelling of the dramatic story and its aftermath will have readers perched on the edge of their seat.”
— The Lady

“Essential reading for anyone interested in Cliburn-or in the cultural history of the Cold War.”
— Terry Teachout, Commentary

“A thrilling delight…compulsively readable…It’s Vanya all the way in a biography for music lovers, Cold War devotees, and all readers seeking a true feel-great story.”
— Booklist (starred review)

“Cliff brilliantly weaves together the politics, personalities, and pianism…A well-researched, fascinating look at a special relationship between Van Cliburn and the U.S.S.R.”
— Publishers Weekly (starred review)

“A sympathetic yet rounded portrait of the pianist…Highly recommended for readers interested in music (especially classical music and the piano) and the history of the Cold War.”
— Library Journal (starred review)

Nigel Cliff is a historian, biographer, and translator. His first book, The Shakespeare Riots, was a finalist for the National Award for Arts Writing and was chosen as one of the Washington Post’s best books of the year. His second book, The Last Crusade: The Epic Voyages of Vasco da Gama, was a New York Times Notable Book. His most recent book is a translation and edition of The Travels by Marco Polo. A former film and theater critic for the London Times and contributor to The Economist, he writes for a range of publications, including the New York Times Book Review. A Fellow of Harris Manchester College, Oxford, he lives in London.